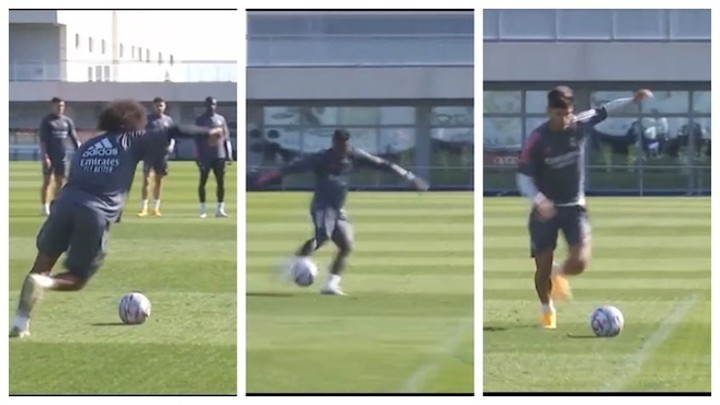 Real Madrid's 1-0 defeat to Cadiz on Saturday left a bitter taste in the mouth of everyone involved with the club, particularly the players, whose frustration was visible during their return to work on Monday morning at Valdebebas.

Zinedine Zidane had the perfect remedy for his squad, as he set up a shooting exercise, more to combat his side's shyness in front of goal but also serving to release some of their anger generated from the recent loss.

Players lined up to take strikes on goal from relatively close range, and there seemed to be a little more zip in the shots than is usually seen on the first day of the week.

The likes of Marcelo, Luka Jovic and Fede Valverde were seen unwinding some powerful shots towards the goalkeepers, with most of them hitting the back of the net.

After that, the players competed in small training matches to step up their intensity for what lies ahead.

Real Madrid have a chance to bounce back quickly on Wednesday, where they take on Shakhtar Donetsk in the opening counter of their 2020/21 Champions League campaign.

The Ukrainians will be far from an easy opponent for Los Blancos, who have proven over the years that they can give any European side a run for their money.

Sergio Ramos was a doubt for the game but the skipper seems to have put himself forward to help the side regain confidence, with the defender's initial problem that forced him to be substituted off against Cadiz appearing less serious.

Martin Odegaard has been ruled out for a month with a calf injury which rules him out of Wednesday's match, while Dani Carvajal, Eden Hazard and Alvaro Odriozola are still on the treatment table.