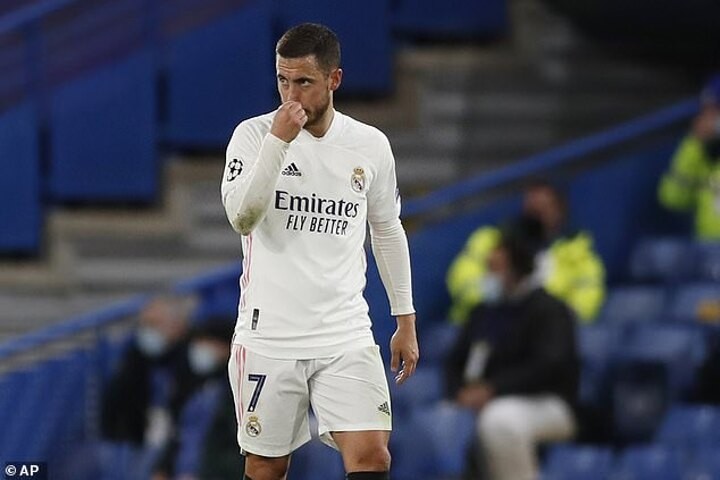 When Real Madrid president Florentino Perez was pushing his European Super League, one of the phrases he repeated several times was that unless something was done to save it, football would be 'dead' by 2024.

The year 2024 also happens to be when Eden Hazard is due to end the five-year, £25m-a-season contract he signed for Real Madrid when he left Chelsea in 2019.

The two things are not unrelated. Madrid's fear about falling off a financial cliff, and having to pay a player £78m gross over the next three years, when he is currently averaging around 20 games and two goals a season.

Marca's editorial called Hazard, 'the worst signing in the club's history, at least until he proves otherwise', on Friday.

The problem for Madrid is that they still have little alternative but to make it work.

It's all well and good for a Madrid television programme to demand that Hazard never plays for the club again after he joked with Chelsea players on Wednesday night but they know it's not that easy.

They can't give away their all-time record signing, and no one right now would want to buy him.

He's on a long contract on high wages and as Gareth Bale has shown in recent years, players in those circumstances cannot be forced out – Bale enters the final year of his contract this summer and Madrid's only hope is that Tottenham will extend his loan and pick-up a good chunk of the tab.

Bale's biggest problem was that, despite two good seasons when he arrived and an extraordinary record in finals, he never won over the Real Madrid supporters.

That was not Hazard's problem last season because when he turned up overweight and only played five complete matches, Bale was still at the club and still taking all the criticism, while Hazard enjoyed a free ride.

It might have been different this season but with no supporters inside the stadium, Hazard has escaped being whistled by a full Bernabeu.

Next season he will have to face the fans but he still has four games this campaign to change the perception of him as a flop and for all that he failed to see Madrid past Chelsea on Wednesday, there have been signs in the last two games that he is approaching something like full fitness.

It's not the level that would have stopped Real Madrid being blown away by hurricane Chelsea on Wednesday but it might be enough to enable him to positively influence Real Madrid's remaining games at home to Sevilla, away to Granada and Athletic Bilbao, and home to Villarreal.

A respectable end of season, especially if it were to result in a league title would take the pressure off for next season.

But even without that, Madrid are stuck with a player they have already paid £100m for, and they might have to shed out more in add-ons before his long contract ends.

He issued an apology on Thursday for sharing a post-match joke with Kurt Zouma but it did little to change the mood among his detractors.

'We had to wait until 8.30 in the evening for it' said Diario AS columnist Tomas Roncero. 'I suppose better late than never'.

He added: 'I'm tired of having to look up old videos of him playing for Chelsea to remind myself how good he is.

'He needs to leave the childish giggles to one side and play these remaining four games with the same enthusiasm he shows when playing for Belgium.'

Zidane is likely to use him for the run-in. The French coach could yet walk away from the last year of his own contract at the end of this season and with his future up in the air he is not going to stop trusting Hazard at this late stage.

The coach and the signing he always wanted will be united to the end. The word around Madrid's Valdebebas training ground has always been that Hazard has a carefree attitude. Zidane relates to that and does not equate it with a player who does not want to win.

If the two can win La Liga together then they may go renewed into next season. If not then Zidane will decide whether he remains in charge and Real Madrid will decide what to do with Hazard but the options for the club will be limited.

It's unlikely that Paris Saint Germain will be interested in him being packed up as part of a Kylian Mbappe deal, although it's a question Madrid are likely to ask.

The likely way forward is that he is reminded of his responsibility to Real Madrid and asked to finally start delivering in his third campaign.

As Marca editor Carlos Carpio wrote in that editorial on Friday: 'Hazard is in debt to Madrid - and he still hasn't realised it yet.'