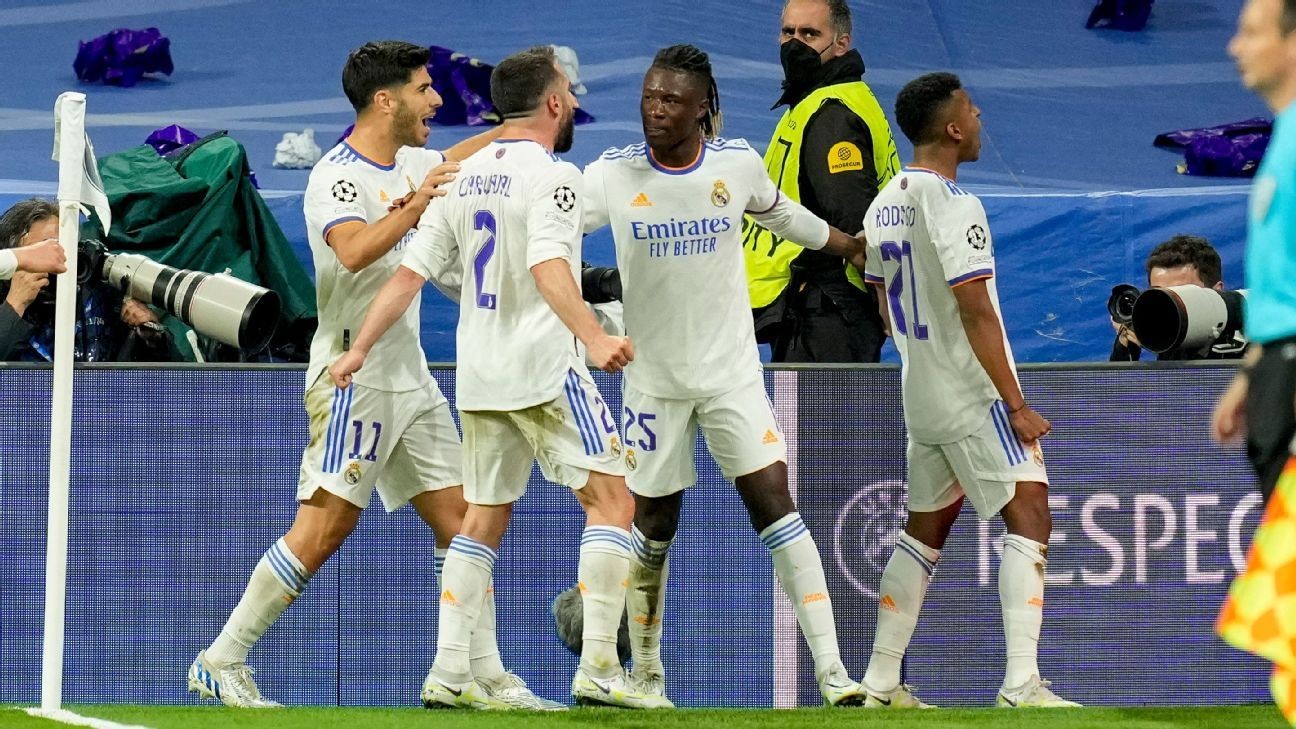 MADRID -- Manchester City and Real Madrid followed up Tuesday night's drama between Villarreal and Liverpool with a remarkable show of their own, with City just moments from reaching the final only for Rodrygo's injury time goals to send it to extra time, 5-5 on aggregate, with Karim Benzema scoring a penalty to send the Spanish giants and LaLiga giants to the showpiece game in Paris on May 28.

Here are three quick thoughts on a spectacular, dizzying and fantastic game.

Real Madrid will face Liverpool in the Champions League final after a dramatic night at the Bernabeu during which Manchester City were just minutes from advancing to Paris.

City were on the verge of booking their place in Paris after Riyad Mahrez's second-half goal had given them a two-goal lead on aggregate, only for substitute Rodrygo to score twice in two minutes in stoppage time and force extra time.

Karim Benzema, quiet up until that point, scored the decisive goal in the first period of extra time from the penalty spot to make it 3-1 on the night and 6-5 on aggregate.

City were in control for the most of the night until Real Madrid's late fight-back, and could have extended their lead before Rodrygo's first goal if Jack Grealish (a second-half substitute) had taken one of two chances. Instead, Real Madrid, crowned champions of Spain on Saturday, will get the chance to win a 14th Champions League trophy when they meet Jurgen Klopp's Liverpool on May 28 in a repeat of the 2018 final.

Meanwhile City are left to rue a golden opportunity to reach a second successive final and having at one stage been challenging for a treble, they're now left to contend for the Premier League.

Which Premier League clubs will qualify for Europe?7mDale JohnsonLIVE Transfer Talk: Pulisic could leave Chelsea to replace Dybala at Juve1hESPNChelsea's uncertain future: How sanctions, confusion are impacting their squad for next season5hJames Olley

Not long after Mahrez had made it 1-0 to City, Real Madrid fans began to stream out of the Bernabeu -- but those who did probably wish they hadn't.

The Spanish side seemed set for a rather meek exit until some scarcely believable drama in stoppage time. Real Madrid didn't manage a shot on target inside the first 90 minutes but by the time six minutes of injury time had been played, City were hanging on and needed Ederson to make a good save to keep his team from going out in the most dramatic fashion.

With Real Madrid needing two goals to force extra time, Rodrygo, on as a 68th-minute substitute, scored what looked like a consolation from Karim Benzema's cross in the 90th minute but less than 60 seconds later, headed in another to make it 2-1 on the night and 5-5 on aggregate. The goal nearly lifted the roof off the Bernabeu and yet there was still time for Rodrygo to get in again and nearly end the tie in normal time, with Benzema's penalty in extra time sealing the remarkable turnaround.

(And in all of this, a special note about Rodrygo: after managing four goals in 79 appearances this season, he's tallied six times in his last six games, none of those as crucial as the goals he scored on Wednesday night. The dramatic brace also made history, with Rodrygo the first player in tournament history to score twice after the 90th minute of a knockout round game.)

Real Madrid staged remarkable comebacks against Paris Saint-Germain and Chelsea to reach the semifinals, but this was the best of the lot.

City were shellshocked by the late goals and had no response in extra time, succumbing to yet more heartbreak in Europe's top club competition. Getty Images3. Man City have another Champions League meltdown

After disasters against Monaco, Liverpool, Tottenham and Lyon, it looked like City had put an end to their moments of madness in the Champions League, but now they've got another to add to the list. This might in fact top them all.

Their path to last season's final was fairly uneventful and they calmly dispatched Sporting Lisbon and Atletico Madrid this year en route to the semifinals, but when the pressure was really on at the Bernabeu, they crumbled. They had a two-goal lead when Mahrez scored and even when Rodrygo's first goal went in, there was no need to panic. But instead, City invited more pressure, lost their heads, and paid a high price. They were lucky the tie even made it to extra time after Ederson was called on to make another save before the end of stoppage time.

It is a result which will raise more questions about Guardiola and the Champions League. Despite having stellar squads at both Bayern Munich and City, he has not lifted the trophy since his time at Barcelona. For a manager of his quality and one who has made a habit of collecting domestic trophies wherever he's been, it remains a strange anomaly that he has not won Europe's top club competition for more than a decade.