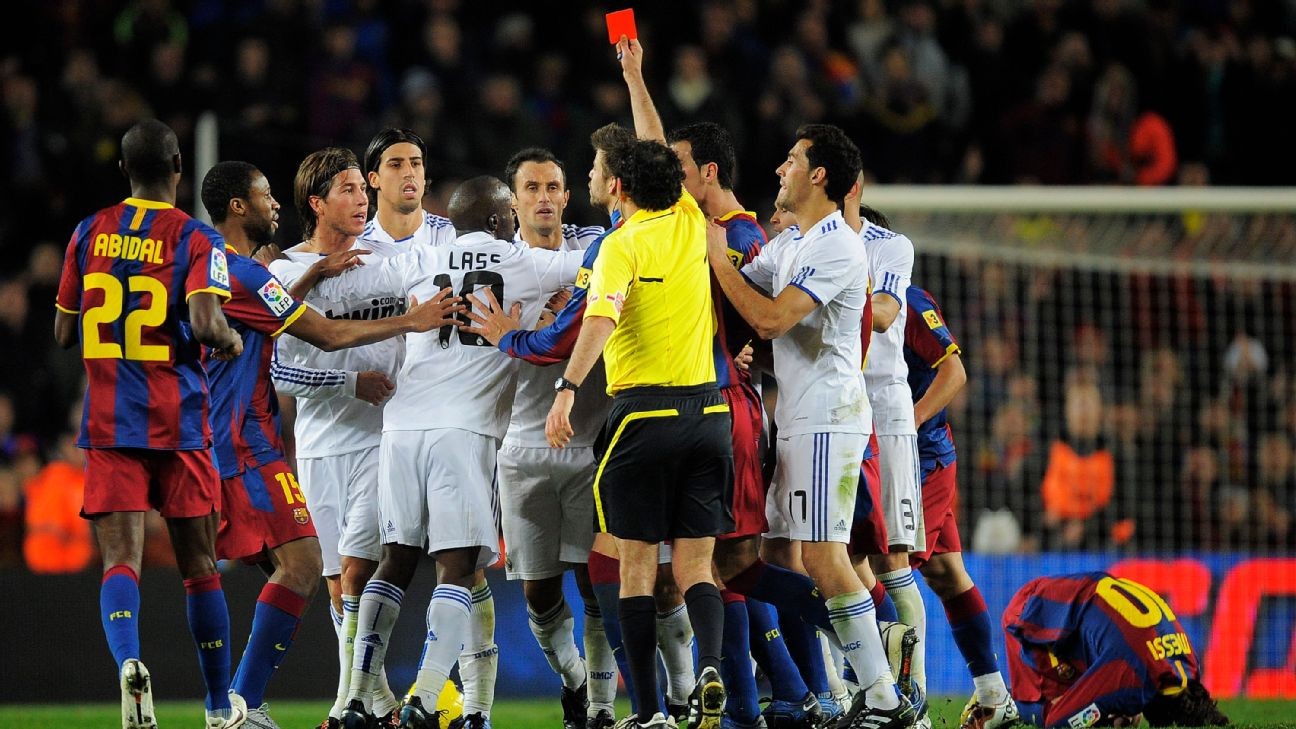 "Iker Casillas came up to me and he said: 'Itu, I love you, but don't ever referee us again.'"

Eduardo Iturralde Gonzalez would have been tempted to take him up on that offer. The former referee laughs. "You know what we used to say the best thing about clasico weekend was? To get another game, any other game. That weekend, if you were doing another game, you knew you could make the biggest c--k-up of your life and no one would notice it; whatever you did, you wouldn't be in the papers, no one would be talking about you. Because the clasico eclipses everything."

"If you get the clasico, the media attention is intense, the pressure's amazing. They're ringing you from everywhere. 'Hello, it's the University of Mexico student newspaper.' It's this lot, that lot, everyone's on the phone."

Of course, being a referee, you don't answer any of those calls and you never say a word. "Well, I did," Iturralde replies. "I was always a bit of a bit of a punk."

- Hunter, Lowe: Everything you need to know about clasico - FC TV: Real's vulnerabilities on display in Champions League

He was also Spain's best referee for other a decade, spending 17 years at the top. And yes, he was a talker. He's also got his own band, by the way, so that punk thing is thing is not so far off. In that time, he took charge of three clasicos: 1999, 2005 and 2010. It might have been more. When referees were chosen by random draw (or supposedly so), he never got a chance. "'Curiously' enough," he says. And, yes, those speech marks are his. When it was chosen by the refereeing committee, the best man selected for the job, he was chosen three times but even then, there was no guarantee. He missed out on a Copa del Rey final clasico because Real Madrid vetoed him, leaving Alberto Undiano Mallecano to do the game instead. Madrid won 1-0; they were also within their rights, he says.

"There was a system where they would choose a three-man list [of referees] and the clubs could say 'no, not that one.' I suppose they didn't like the way I refereed."

No one does, in reality. No one is ever happy. And there was a headline once -- typical in Spain, where results are offered up as definitive proof of refereeing "bias" when what is really being shown in the bias of the media saying so -- that said: "Iturralde, good for Barcelona."

"Yeah," he scoffs, "that's like going to the Premier League now and saying: 'Referee so-and-so, good for Liverpool.' Bah what you gonna do? Of course you're 'good for Barcelona' if you're there refereeing them in the Guardiola era."

That must make you angry though, right? "Nah, we're all so used to it."

Iturralde presided over three clasicos, all of them Barcelona wins. In 2010, he sent off Sergio Ramos for a nasty foul on Lionel Messi.

When it comes to clasicos, Iturralde's games were good for Barcelona, it's true. He took charge of a 3-1 win, a 3-0 win and a 5-0 win. All about the referee, then. Not exactly tight results: Barca outscored Real 11-1 overall, which is a particularly historic scoreline in this fixture: it's the result of an (in)famous match in 1943 which is a whole history in itself, still disputed even now. Iturralde has been in the public eye, judged and criticised, his decisions pawed over, television footage stopped and started and analysed over and over. But whatever they see on the screen, whatever any of us do, it's just not the same, he says.

"I don't think you do enjoy it as such, no; you're too focused for that," he says. "When you get home, you see a load of things you didn't see during the game. But I tell you what: on the television there are loads and loads of things you don't see on the pitch. Above all, the speed is miles greater. It looks like slow motion on TV but it's incredible how fast it is, the way they move. There's no television camera in the world that can transmit that or fully capture it. Seriously: the TV is not a true reflection of what's happening, which is one of the problems with the VAR, of course. Down there the speed is diabolical. Physically and mentally they are so, so fast."

It means that referees have to be, too, and never is the scrutiny more intense than on a weekend like this one, with the two teams separated by just two points at the top of the table with 13 games remaining.

"In the first clasico, I was only 28, I think, and I sent off Roberto Carlos. [Real Madrid defender Christian] Panucci ran across to me, swearing at me. 'You're too young for a game like this!'" Eleven years on, he took charge of that 5-0 at the Camp Nou. He was also the man in the middle when the Bernabeu stood to applaud Ronaldinho after he had put them to the sword.

"That was special. I went silent for a moment and then you see the clapping. I said to him after a while 'come on then, let's get back to the middle, restart this game' and he laughed and said: 'eh, you liked that one, didn't you?' Ronaldinho was different, always grinning, always laughing. You'd look at him and think 'bloody hell, this guy is loving this.'"

"Lionel Messi doesn't, though. You look at him and wonder if he is enjoying it. Maybe on the inside he is, he probably is. But he hardly ever smiles."

Never talks, either? "Not a word. Never. A lot of the great players don't. Zinedine Zidane never used to say anything; [same with] Ronaldo. Weirdly, look at the ones I got on well with and they were the 'worst' -- [Valery] Karpin, [Aleksandr] Mostovoi, the ones who came straight at you. I liked them; at least it was to your face. I never had a problem with Mourinho. Xavi was one who never stopped talking, and he was right next to you because of his position. All game long. I would talk back though. I've said to players 'and what if I have a go at you for misplacing a pass?'"

"Players don't protest because you got [a call] wrong; they protest so that you get it 'right' next time -- in their favour, in other words."

Iturralde never let criticism or accusations of bias impact his refereeing. 'There was a system where the league would choose a three-man list of referees and the clubs could say 'no, not that one.' I suppose they didn't like the way I refereed.'

"I talked a lot, but on the players' level. I talked on their terms, in their way, not from a position of superiority. People say [Antonio] Mateu Lahoz is a referee who likes dialogue with players, for example, but he's not: he likes to talk, but he doesn't let players talk. That's not dialogue. Dialogue is both [sides] talking."

Nor is it dialogue when they ignore you. "Messi doesn't say anything and there's no point in talking to him the way I did with some. I remember one time he scored this brilliant goal. And I said to him: 'Eh, don't get cocky: I've scored loads like that. He looked at me and he's probably thinking 'what's this dickhead going on about?' but he didn't say a word. Didn't even smile."

Nor did Sergio Ramos when Iturralde sent him off for booting Messi in the air at the end of the 2010 clasico, which Barcelona won 5-0 at the Camp Nou. There was nothing he could say, he knew it was right, so he walked. Iturralde, meanwhile, knew it was coming. "It was one of those you can 'smell'. I saw him running towards Messi and I thought: 'he's going to whack him.' It's important to know players, systems and movements, to understand [them]. You can't just know the rules, you have to know the game. If I hadn't 'smelt' that I wouldn't have been in the right place to see it."

"Then there was this melee. Ramos confronts [Barcelona defender Carles] Puyol, Xavi is there, the two goalkeepers come over. Everyone's confronting each other. I tried to get in the middle of it, tried break it all up, but it was impossible: there were arms everywhere. The only one that's not in the middle of it all is [Andres] Iniesta. I say to him: 'bloody hell, what are you lot like?' And he says: 'ah, you love it.'"