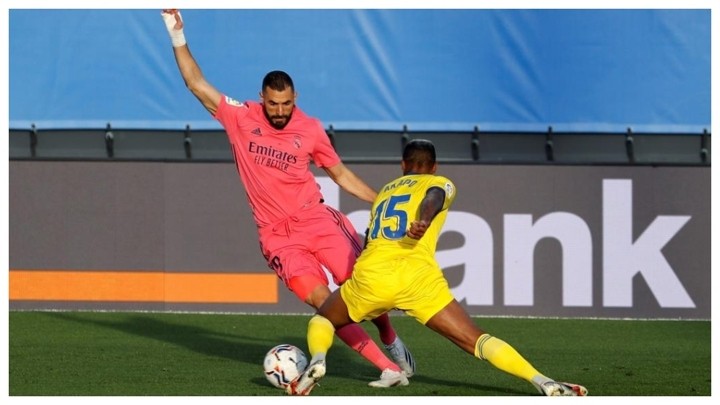 Real Madrid have spent too long struggling to find the net for a team of their stature. Cadiz took advantage of this slump in front of goal and came away from the Estadio Alfredo Di Stefano with all three points on Saturday.

This isn't new, either, especially this season. Los Blancos were held to a goalless draw in their opening game of the season against Real Sociedad and only beat Real Valladolid by a single goal too.

Last time out, Thibaut Courtois was frequently called into action to protect a one-goal lead against Levante at the Estadio de la Ceramica. Karim Benzema didn't score the visitors' second goal until stoppage time in the second half.

Without counting the three goals against Real Betis at the Estadio Benito Villamarin - one of which was an own goal and one a penalty - Real Madrid have scored three goals in four games in LaLiga Santander this season, which is a worrying statistic.

In terms of team selection, Zinedine Zidane continues to chop and change, looking to find the right balance for Benzema to work with up front, although the striker is yet to find his best form this term.

With the team not posing much of a goal threat, they can no longer rely on their defence and goalkeeper to earn them results. Against Cadiz, Courtois was exposed far too many times during the first half.

Vinicius Junior is the top scorer this season for Real Madrid, but he's only managed to score twice. Their top scorer for the last two seasons, Benzema, is only on one goal this campaign.

With the other two goals this season coming from Sergio Ramos and Fede Valverde, none of Real Madrid's other attacking players have contributed.

Zidane had Benzema, Vinicius, Luka Jovic and Marco Asensio on the pitch at the same time against Cadiz but there was no route to goal for Los Blancos.

The lack of attacking output suggests that Real Madrid may have to delve into the transfer market when the economic climate allows.

While Real Madrid continue to find goals hard to come by, names like Kylian Mbappe and Erling Haaland will keep cropping up.