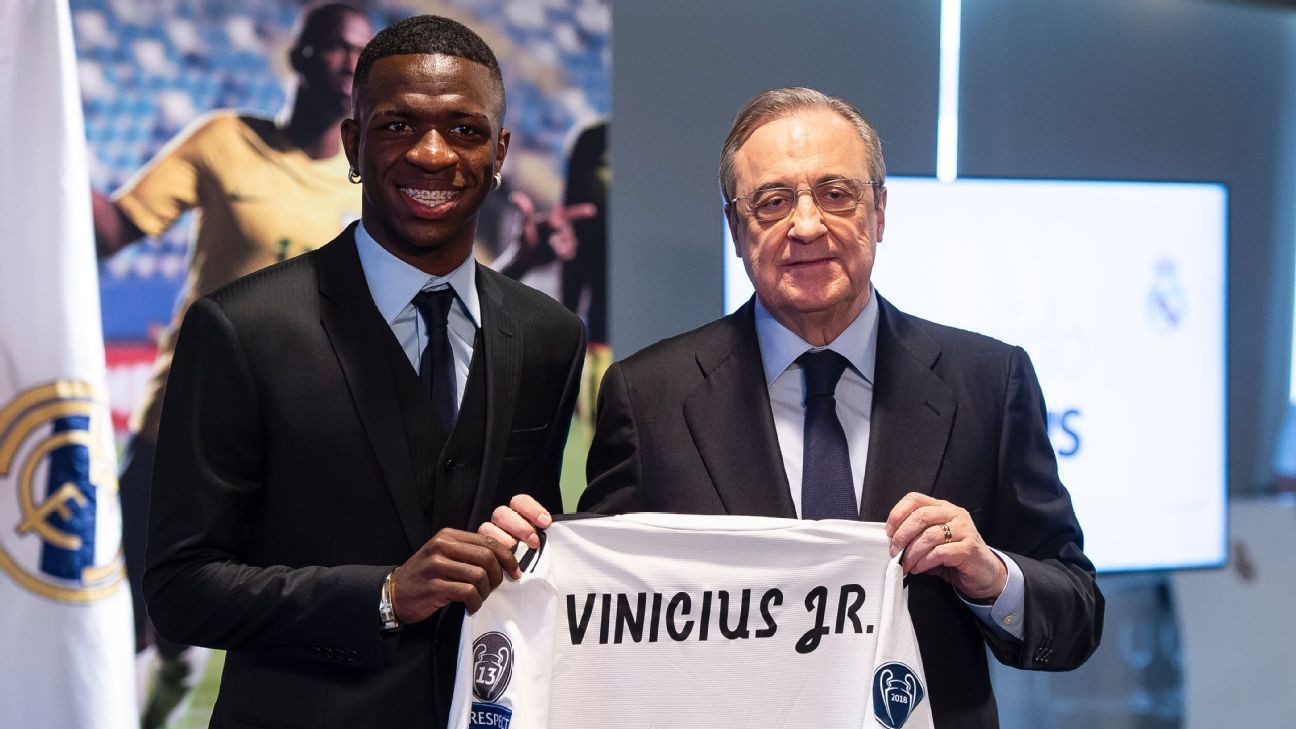 I wonder how many fans truly care that Real Madrid have already spent a couple hundred million euros in the summer transfer market without yet addressing their serious need for energy, drive and control in midfield.

It's an even stronger bet that only a tiny percentage of football supporters give a hoot that, according to financial fair play, every club is allowed a maximum "overspend" of €100 million when outgoing transfer funds are measured against transfer income in a given financial year. So if, as seems likely, Madrid will spend a minimum €400m on their targets this summer, they'll theoretically need to ship out players for at least €300m -- or at least make it look that way.

While transfers have always been deeply fascinating, offering frissons of thrill, glimpses of a glorious future, juicy opportunities for jealousy and delivering shock factor, modern transfer windows have gradually turned into pure theatre -- sometimes of the slapstick variety.

- Transfer grades: Every big signing from Europe's top clubs
- Ogden: Madrid need to offload Bale, but they're low on options

For all their grotesque numbers, for all the utter nonsense that some branches of the media knowingly disseminate, for all the speculation published in response to the latest story reported by a rival outlet, the fact is that the public gobble all this up -- or large sections of the public, anyway. And it's a great way for clubs, sponsors and agents to generate publicity and, obviously, vast sums of money.

Real Madrid are the chief actors, of that there can be no question.

From the early 1950s, they believed in Galactico signings; only it wasn't called that then when president Santiago Bernabeu and his right-hand man Raimundo Saporta revolutionised football with the idea that if Madrid wanted to be No. 1 in the world (which even then they most certainly did), they'd need a policy of pursuing and signing the best individual talent regardless of nationality, age and, in some cases, price.

It may seem like old hat now to anyone either not born or not fully engaged with football back in 2000, but it's impossible to overstate the shock and awe inspired by Madrid, with Florentino Perez newly installed as president, gleefully ripping Luis Figo from Barcelona's disbelieving and powerless hands by paying a world-record fee that covered the release clause in his contract.

But if, like me, you're someone who's more attracted to the beauty of a long season well fought that ends in trophies, teams that show character, development and unity, then this summer needs to be more than an entertaining pantomime. In summary: if you look beyond their quite fantastic Champions League record, domestically, Madrid need a good, firm kick up the backside.

They've lost eight of the past 11 Liga Clasicos at home by an aggregate score of 14-29. That's an astonishing statistic. They've been Spanish champions twice in the past 11 years. That's nowhere near good enough, but it's better than their Copa del Rey record: twice champions in the past 26 years.

Not only have Atletico Madrid pipped them to second place in each of the past two seasons, it's also true that Madrid each time finished significantly closer to fifth place than first. The gap between Los Blancos and the title winner in 2018 and 2019 was, aggregated, 36 points. Last season they needed three coaches -- a sign, regardless of the club, of deep divisions and problems.

So no matter how entertaining their summer performance may be, in either a positive or negative sense, here are five important things that are in play -- other than helping papers repeatedly splash with front pages trumpeting who's in and who's out at the Bernabeu.

Florentino Perez stands at the centre of what should be a dramatic summer in the transfer market for Real Madrid.1. Who's really the boss?

Given their typically close relationship, it's interesting that Madrid's president and coach aren't quite seeing eye to eye. Worrying, at least, if you take into account that Zidane walked away this time last year and, only a couple of weeks ago, stated quite clearly that if he wasn't fully in charge of running the team the way he wanted, he'd walk out the "Exit" door again.

Barcelona: Who will play alongside Messi up front?

Man United: Who should Solskjaer build around?

There are a raft of problems to solve here.

Zidane clearly wants Paul Pogba, and whether you agree with him or not -- and I don't -- his judgement should be respected and backed. Perez, and some around him, seem to believe that Christian Eriksen is a better, more reliable, cheaper bet.

Then there's Luca Zidane. His father patently thinks this kid is ready to be Madrid's second-choice keeper. But what of Andriy Lunin, signed for that role, internationally regarded for his play with Ukraine and requiring far more game time than he received on loan at Leganes last season?

What, also, of Keylor Navas? Being pushed out when many think he's still better than Thibaut Courtois. Who will buy? At what price? It's a minor mess.

Then there's Vinicius. Word has it that Zidane would be happy to loan him out. The young Brazilian's match time once the Frenchman took over and had him available seems to back up that impression. But the Bernabeu bays for Vinicius, they recognise brilliance however youthful. And Perez is opposed to anything other than a front-and-centre role for this sublime attacking force of nature.

These conflicts can be resolved, of course. But Madrid have no director of football to intervene, and neither Perez nor Zidane are accustomed to being told "No" nor particularly good at dealing with it when it happens. It's a tricky situation.

2. Can Madrid build a balanced team?

There's now a surplus of attackers, with the purchases of Luka Jovic and Eden Hazard, the emergence of Vinicius, Brahim Diaz and Mariano, the arrival of Rodrygo plus Gareth Bale's stubborn unwillingness to leave -- not to mention the presence of Borja Mayoral, Raul de Tomas, Lucas Vazquez, James Rodriguez and Marco Asensio. And Karim Benzema remains a fixture.

Defensively, there are at least two for every position, and if Ferland Mendy passes his medical, that overbooking will only increase. Goalkeepers we've already covered.

But Madrid's midfield, last season, was paper thin. They were easily exposed, outworked, lacking in drive, missing tackles and dragged around -- how Toni Kroos earned a new contract I'll never understand. This is where huge work remains.

Does Federico Valverde stay? Does Luka Modric stay? What's wrong with Casemiro and is it a temporary physical trough? Will either Eriksen or Pogba sufficiently renovate the engine room, at a cost that begins at €100m, for Madrid to punch their weight again? Who'll buy Dani Ceballos, Mateo Kovacic or Marcos Llorente for sufficient money? And must Isco be sold?

It is a complex set of problems, and costly to solve -- still more costly if Madrid fail to do so.

3. Will a bloated squad hurt Madrid?

Top coaches like a small, but perfectly formed squad. La Liga clubs are allowed 25 senior players licensed to play each week. The reasons for top coaches liking small squads include such a group being easier to coach effectively, there being fewer guys who neither count much in training exercises nor are basically sitting out the majority of the season.

Elite coaching sessions need to be ultra sharp, players' attention needs to be completely focussed, their minds and competitive instincts need to be engaged. You'd be shocked by how easily rust can set in on a daily basis and utterly undermine the authority of the coaching team. In each of the past two seasons, Madrid gave 21 players 10 or more appearances and 18 players 10 or more starts.

In their title-winning seasons of 2008 and 2012, the number of players with 10 or more appearances or 10 or more starts were 18 and 16, then 18 and 15. That's a significant difference. Until Operation "Sell! Sell! Sell!" begins to gather momentum, Madrid are grossly overstocked.

4. Bargains to be had for other teams

Back in 2010, Arsene Wenger joked that his key transfer-market strategy was to hang around outside the Bernabeu and pick up bargain castoffs.

Skip forward nine years and the joke would work again. Madrid need to generate cash, now and particularly more so if, say, Kylian Mbappe were to become available. They need to trim the squad drastically.

They need to arrange loans, they need to entice buyers with reduced prices. There are bargains to be had here; shrewd clubs will already have lodged bids to take Rodrygo, Vinicius, Llorente and Lunin on loan.

But will Madrid be forced to sell, and drop their asking price, on talents like Asensio and Isco? They very well could be.

I've made this argument before, but might the brutal summer that lies in wait for Madrid -- brutal in terms of workload, stress and risk -- be sufficient to convince Perez that promoting Zidane to director of football in May 2020 and appointing, say, Raul or Xabi Alonso head coach might be the right way forward for a rejuvenated, slimmed-down, modern, forward-thinking and successful Real Madrid?