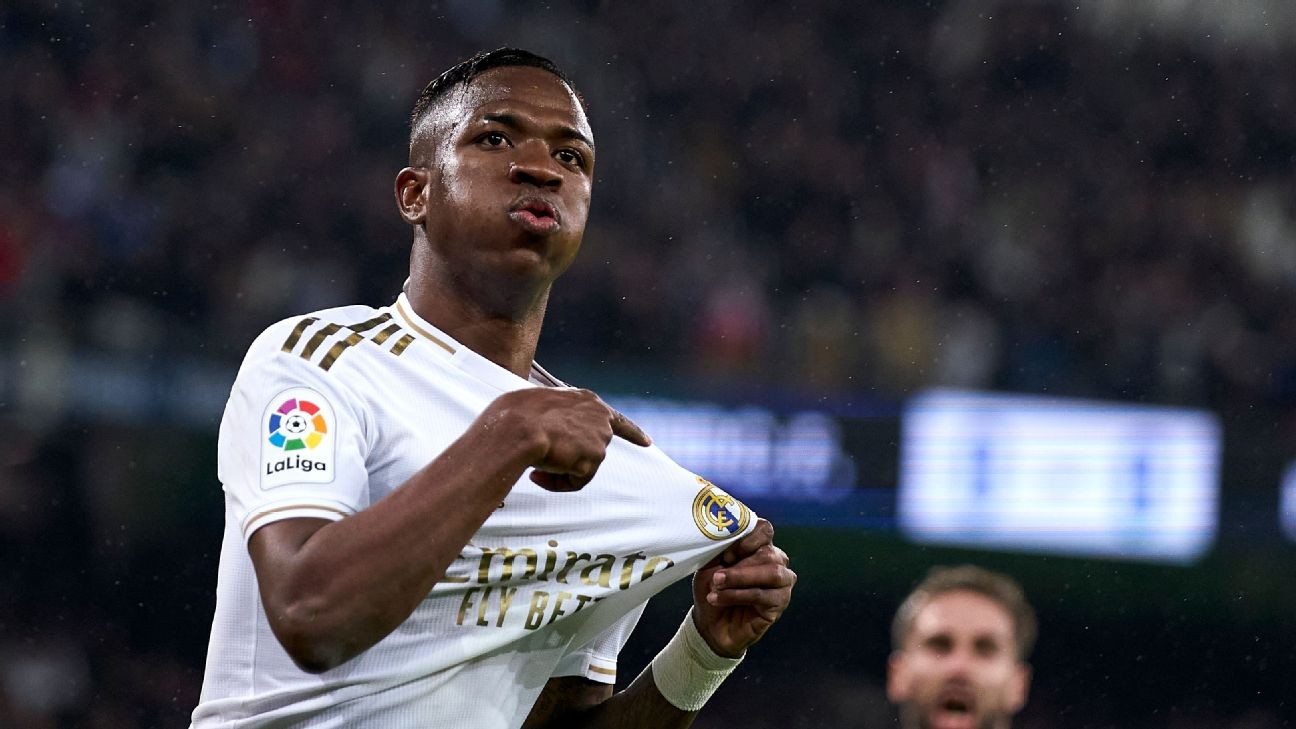 MADRID -- His goal wasn't a thing of beauty, he's a work in progress, and I'm not trying to sell you the idea that Vinicius Junior is about to threaten the Ballon d'Or podium. But let's not beat around the bush: We are watching a brave, technically talented, uplifting young mustang of a footballer who has just turned the La Liga title race firmly back in Real Madrid's favour. This Clasico has also been the scene of further proof that the one-on-one tutorials Zinedine Zidane has been offering his star pupil, on the quiet, isolated fields of Valdebebas out by Madrid's Barajas airport, are in the process of giving Vinicius wings.

There's a terrible predilection among many fans, too many in the media and some ex-professionals to take the easy route when analysing a footballer. The temptation, because it's easier and probably makes more headline-grabbing statements, is to criticise, to spotlight things a guy can't do, does badly or that are frustrating.

It's a growing trend. The more information there is bounding around, the more that people judge on measurables that don't reflect the real, chaotic, "who dares wins" nature of high-tension, high-stakes football. So it's facile, and like consuming meaningless carbs from comfort food, when people stick to the boring refrain: "But look what Vinicius does close to goal" or "he's still too erratic in the final third."

That he scored the match-breaking, title-turning goal here isn't the sole point -- not by any means. Vinicius' deflected winning goal now makes it a hat trick of the most recent vital matches at Madrid's stadium he's impacted.

Let your mind trot back to the Madrid derbi in February. Zidane got it wrong in the first half, changed up during the break and brought on two wide players. Vinicius played terrifically, used his left wing beat to flick a tremendous pass for Ferland Mendy to burst into the Atletico penalty area and serve up the winner for Karim Benzema. Then, in midweek, although Los Blancos lost to Manchester City, it was Vinicius who served up Madrid's opener to Isco for the 1-0 goal.

OK, they didn't win, but that's not the fault of this young Brazilian buck.

I'm ignoring his goal that broke the Champions League tie in Bruges because it was away from home and late last year, but believe me when I tell you we're watching the maturing of a special talent. However, it's the industrial rubber nature of his confidence that I like. Or perhaps let's make that his unshakable belief in himself, no matter how many times he doesn't pull off a move, how many times the media pigeonhole him as incapable of bringing home the bacon or how many times the stadium groans rather than roars.

If a kid is born with talent, technical ability and speed, they are huge advantages. But if he's incapable of withstanding pressure, permanently susceptible to catching a cold and staying home every time the weather is against him, then those talents are wasted. Vinicius is, without doubt, full of bounce-back-ability. He tries to take his man on and if it doesn't work, he's not thrown. He doesn't shrivel as so many footballers, even when the are older or more experienced, do.

It's not about personal failure, it's about how you respond when you feel that the world is against you, when you feel that your teammates are doubting you, when you begin to think. Take, for example, Junior Firpo, Barcelona's left-back who Quique Setien dropped because the kid is filled with fear of getting it wrong instead of risking getting it right. When that mindset takes hold, that's when you're in trouble.

Vinicius broke open the game on Sunday, and even if Marc-Andre ter Stegen was beaten because Gerard Pique deflected the young Brazilian's shot at goal, he made his own luck.

To my mind it was what happened next that made this extra special for the 19-year-old. Sequentially, he set about making sure that Barcelona didn't have a way back into this match. From the 79th minute until the end, he darted back and robbed the ball off Arthur when his fellow Brazilian was imperiously standing over the ball planning his next move; Vinicius nipped in and burgled possession before the Barcelona midfielder was even conscious he'd left his back door open. A minute or so later it was Nelson Semedo who was out-paced and out-tussled for the ball.

Vinicius was up for everything but, importantly, he was contributing in precisely the area Madrid most needed: denying Barcelona any time or space to create or believe.

Vinicius is a work in progress, but he delivered Real Madrid's winner over Barcelona on Sunday.

When Vinicius is spoken about, the debate is monochromatic, mostly because a lot of football analysis and debate today is sheep like. Someone will point out, reasonably enough, that given Vinicius's propensity to create space on the left, to bring the ball out of the air with a simple, confident touch of thigh, chest or right foot, his end product isn't like a metronome.

What's never spoken about is his willingness to drop back, to press, to defend, to rob, to work until he's exhausted. Winger's don't generally do that, but Vinicius isn't generally lauded for what he does like, for example, away at Getafe earlier this year when the 0-3 goal came from his willingness to drop back to the corner flag and help Mendy clear to Gareth Bale who set up Federico Valverde who gave the goal to Luka Modric. Vinicius was at the heart of the counterattack.

Well, here, on Sunday in the rain with Barcelona vainly trying to claw a way back into the Clasico, Vinicius' next move was to rob the slow and unsure players on the edge of their box and break through such that Ter Stegen had to make a one-v-one diving save to prevent a second goal. But because Mariano Diaz's goal -- scored by a guy who grew up nearer the Camp Nou than most of Barcelona's current squad -- made it 2-0, it'll be lost on most analysts and most fans that it was Vinicius, with six minutes left, in his own corner area, on Madrid's right, who robbed Semedo when the Portuguese was trying to mount a point-saving attack. Vinicius had tracked back, made a nuisance of himself and cleared the ball to Toni Kroos.

All in all, you have to salute Vinicius. Is he perfect? No . Is he capable of brain freezes like the goalmouth chance against City in midweek? Yes.

But he's all of us. He's the kid who dreamed, the kid who wants to use the ball to entertain and to risk and to stamp his name, long and complicated though it is, all over the most famous and successful club in European history. He's a work in progress, but so were the Sistine Chapel, the Mona Lisa, the Hanging Gardens of Babylon, Cristiano Ronaldo and even Lionel Messi once upon a time.

If Vinicius never reaches the heights of being an eighth wonder of the (footballing) world, then I won't feel embarrassed because, for the moment, he's uplifting, daring, inspirational and, for Real Madrid, vital.