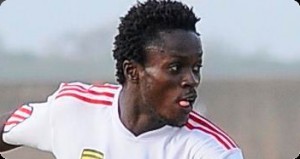 The 21-year-old has been on the radar of the former European champions since Kotoko's pre-season tour of the Eastern European country in August last year.

But he must do more to impress Red Star head coach Robert Prosinecki to earn a deal in the January transfer window which shuts at the end of the month.

Asamoah has been in form this season for the Ghana Premier League leaders having scored five goals as a supporting striker.

He is expected in the Serbian capital on Monday 9 January and will miss Kotoko's last two matches for the first half of the season.

Ghana coach Goran Stevanovic is backing the quicksilver to succeed in Europe.

"He's young and extremely talented and I believe he will explode in Europe, wherever it comes! Of course, in the Red Star," Stevanovic told the Serbian press.

"He has great potential and plenty of room for improvement.

"I know well Asamoah and I can say that it is a very good player. He was in my team for a qualifier against Swaziland but has not had a chance to play in official matches."

He added that: "There is intense competition in the team but his time is certainly coming."

Red Star Belgrade are impressed with their past Ghanaian signings are keen to bring another on board.