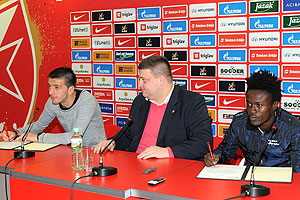 The 22-year-old completed a four-year move to the former European champions last month after a two week trial.

Asamoah together with Serbian midfielder Marko Miric were presented to the club's fans and supporters on Wednesday in Belgrade.

The striker is on the trip to Turkey for the club's pre-season training in Antaliya.

"Given that Asamoah was on trial before signing the contract, his games convinced the coach to own quality for Red Star, just like Miri? whom we followed a year and a half, but only in this transitional period coincided all dice for his apprehension," he said

The former Kotoko striker said he is happy to join the club.

"I thank God for the opportunities that have appeared. Red Star is a great club."