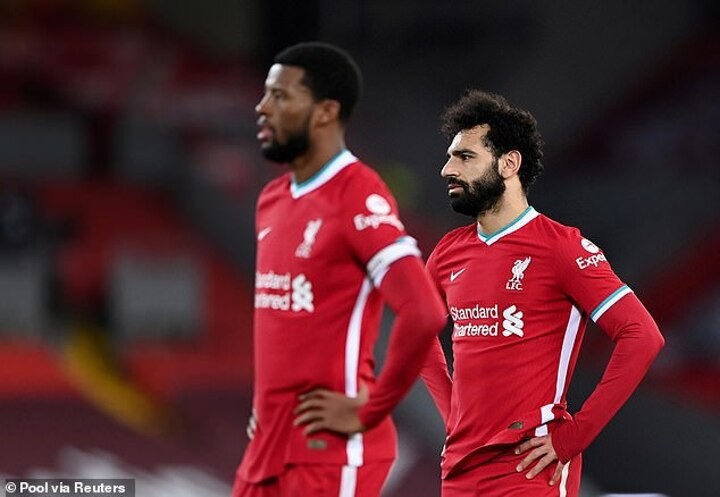 Liverpool's title defence has been described as 'unacceptable' by club legend and TV pundit Jamie Carragher as Jurgen Klopp's champions have slumped to sixth, 19 points behind leaders Manchester City.

But history shows they aren't the first club to have fallen off the cliff having reached the summit the previous season.

Sportsmail looks at other fallen champions, why Liverpool have struggled this season – and those exceptional teams who have thrived on being No 1.

Having been feted for their wonderful midfield quartet of Gordon Strachan, Gary McAllister, David Batty and Gary Speed, Leeds stunk the place out as champions and remarkably failed to win a single away game all season.

Eric Cantona was sold midway through the campaign to Manchester United and Howard Wilkinson's men failed to win any of their last six games to finish only two points above the relegation zone.

Wilkinson later defended his decision to let King Eric go, saying the Frenchman had reacted to being left out against QPR by leaving the team hotel and going home.

Rovers fulfilled Jack Walker's dream by pipping United to the title in 1995, with the SAS of Alan Shearer and Chris Sutton integral.

Yet their defence was seriously disrupted before a ball had been kicked when manager Kenny Dalglish quit to move 'upstairs' with assistant Ray Harford moving into the hotseat.

Rovers lost four of their first six games and never recovered. A 5-0 defeat at Coventry in December was the lowest point and though their form gradually picked up, it wasn't enough to stop talisman Shearer from signing for Newcastle at the end of the season.

Without Dalglish at the helm, team unity slipped, personified by a fight between team-mates Graeme Le Saux and Batty on the pitch during a Champions League game against Spartak Moscow.

Manchester United delivered a crash course in how not to replace a legendary manager. Everyone knew it would be hard to live without Sir Alex but nobody really expected them to implode quite spectacularly.

Fergie had retired in the summer of 2013 having led United to the title by 11 points. His successor David Moyes lost successive games to Manchester City and West Brom in September to slip into the bottom half of the table and United's challenge was already effectively over.

Ed Woodward was blamed for restricting his transfer market activity to panic buys for Marouane Fellaini and Juan Mata. In return, he thought Moyes was indecisive in picking targets. The Scot barely played Wilfried Zaha, who had been Fergie's last signing.

Moyes was sacked in April after it became impossible for United to qualify for the Champions League. 'I expected it to be a six-year plan,' he complained about his exit.

The die was cast on the opening day of Chelsea's defence when Jose Mourinho became embroiled in a row with club doctor Eva Carneiro after she ran onto the pitch against Swansea to treat star player Eden Hazard.

A split in the camp affected performances on the field.

'I feel my work is betrayed,' he complained after a 2-1 defeat at Leicester in December, suggesting the players had downed tools. It proved to be his last game in charge – just seven months after leading Chelsea to the title.

The soothing Guus Hiddink was appointed as interim for the rest of the season and guided Chelsea to mid-table despite winning only one of his final seven league games.

It was a sobering experience for everyone at Stamford Bridge and paved the way for Antonio Conte's appointment and another bounceback to the title.

If Leicester's title win was the stuff of Hollywood movies, the following season was a stunningly awful sequel.

So bad that managerial hero Claudio Ranieri was sacked in February, nine months after lifting the trophy, with Leicester just one point above the relegation zone with 13 games left.

The departure of N'Golo Kante to Chelsea immediately after winning the league clearly upset the balance of the Leicester team. They also had to deal with coping with Champions League football and opponents at home getting accustomed to their counter-attacking style.

Coach Craig Shakespeare took over from Ranieri and guided them to safety. Their top scorer remained Jamie Vardy but his Premier League tally slumped from 24 in their title-winning season to 13.

Injuries are the major reason behind Liverpool's alarming decline after winning the league by 18 points. The heart of their defence has been ripped out.

Not only have all three of their established centre-backs Virgil van Dijk, Joe Gomez and Joel Matip suffered long-term injuries, but their preferred replacements Jordan Henderson and Fabinho have also been sidelined.

It left Jurgen Klopp finishing last weekend's Merseyside derby defeat against Everton with rookies Ozan Kabak and Nathaniel Phillips as their partnership. In January they signed Ben Davies from the Championship as an emergency.

'It's probably clear that in a normal transfer window, without any issues, we would not look at Preston,' said a candid Klopp.

However, injuries are not the only reason Liverpool's momentum has stalled. The front three of Sadio Mane, Roberto Firmino and Mo Salah – so spectacularly consistent in front of goal over the past three years – have run out of steam on occasions.

Trent Alexander-Arnold has had the first dip in form of his career. Henderson has been missed in midfield by having to play at the back. Having gone nearly four years unbeaten at Anfield in the league, Liverpool have now lost their last four there.

Klopp has conceded the title is gone. The top four is now his aim and he has a big decision to make whether to alter the strategy that has brought him so much success in order to stop the rut.

..THIS IS HOW YOU DO ITMAN UNITED

Anyone who thought Sir Alex Ferguson would rest on his laurels after landing the unique hat-trick of Premier League, FA Cup and Champions League was sadly mistaken.

United enjoyed their biggest-ever winning margin in the Premier League using their mid-season sunshine trip to Brazil for the Club World Cup to great advantage. They won their last 11 matches including a 7-1 thrashing of West Ham.

What was remarkable is they didn't even have a settled goalkeeper – Mark Bosnich, Raimond van de Gouw and Massimo Taibi sharing duties.

Mourinho built his first title side on strong defence with the 15 goals conceded by Chelsea in 2004-05 still a Premier League record.

Instead of resting on his laurels, Mourinho went out and signed Michael Essien and Chelsea were just as ruthless in their title defence, winning their first six games without conceding a goal. They were never threatened and won the league by eight points.

It wasn't just about keeping the back door shut. Frank Lampard scored 20 goals and he, John Terry and Joe Cole were part of the Golden Generation team that went to the World Cup with England that summer.

Manchester City said farewell to legend Yaya Toure after their record-breaking campaign in 2017-18 but won even more trophies without him despite being pushed all the way in the league by Liverpool.

Pep Guardiola's side showed incredible consistency to win their last 14 league games of the season with captain Vincent Kompany providing the key moment with his wonder goal against Leicester in the penultimate match.