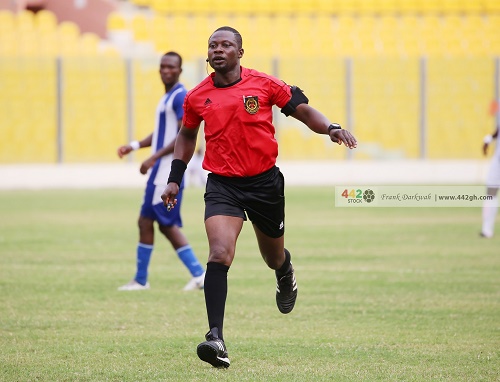 The Ghana Football Association on Wednesday announced that referee Eso Doh Morrison has been suspended for eight games over a wrong penalty decision in a Premier League match.

According to Match Review Panel, Morrison erred in his decision to award Aduana Stars a penalty in the clash with Hearts of Oak on matchday 3.

Morrison sent off Mohammed Alhassan and gave Aduana a penalty in the 78th minute after adjudging the Hearts of Oak defender to have committed a foul on Bright Adjei.

Bright Adjei converts a penalty to level the score line.

Replays showed it was a soft call but Adjei wouldn’t mind as he scored to cancel out Kofi Kordzi’s early strike as the game ended in a stalemate.

The Phobians complained about the decision that cost them three points and referee will not officiate for eight matchdays.

Below is full decision by the Match Review Panel;

OBSERVATIONS, FINDINGS AND GROUNDS OF THE DECISION Per the video watched, the 23rd minute complaint did not show any clear contact of the two players involved in the tackle. In the 63rd minute, there was a clear contact in the tackle between player of Heart No. 9 and Aduana player No. 24, but the referee rather judged it as a fair tackle instead of a foul. The referee erred.

In talking to the referee, he tried to defend every action and decision he took during the match even when all the actions were replayed to him in the video clips.

DECISION(S) The referee (Eso Doh Morrison) is hereby suspended for eight (8) matchdays effective from the date of communication for the multiple errors committed during the match.