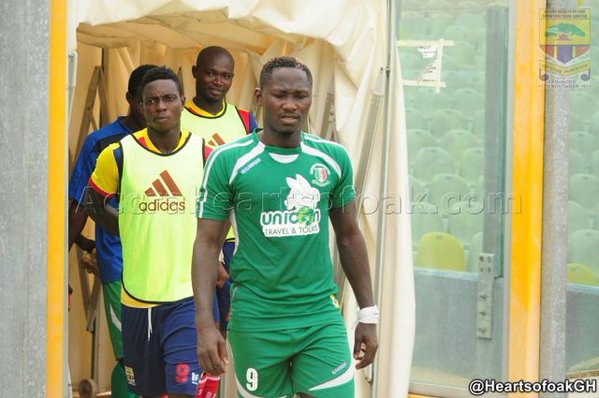 Hasaacas striker Eric Bekoe has admitted he would be open to moving to Ghana Premier League champions All Stars after his team suffered demotion from the topflight.

The former league top scorer’s eight goals in the just ended campaign was not enough to save the famous Sekondi club from taking a nosedive into the Division One.

And Bekoe, who signed a year contract with Hasmal, is not interested in featuring for the club in the second tier league and is already looking forward to better options but will not turn down an offer from the Northern Blues.

“I signed for only one year for Hasaacas and therefore if the season has come to a close, I’ve to sit down with the club’s management to see the next direction to take, but due to the relegation we suffered, tempers are high and because of that I’ve decided to wait a while to approach them.” He told Happy FM

“If you believe in your qualities as a top player, you fear no challenge. I’m very fit to test myself in any team because if you had the opportunity of watching me in the league, you’d bear with me that indeed I was in top shape, but I wouldn’t like to judge myself.”

“I’m open to any offer and if it happens to be Wa All-stars, that’ll be great. Because when it comes to playing in African competitions you need experience and I feel with how my fitness was questioned before the commencement of the season, and the way I scored my eight goals without even playing in all the matches makes me a good fit.’’

All Stars will certainly be in the market for top talents to beef up their squad ahead of next year’s CAF Champions league campaign.