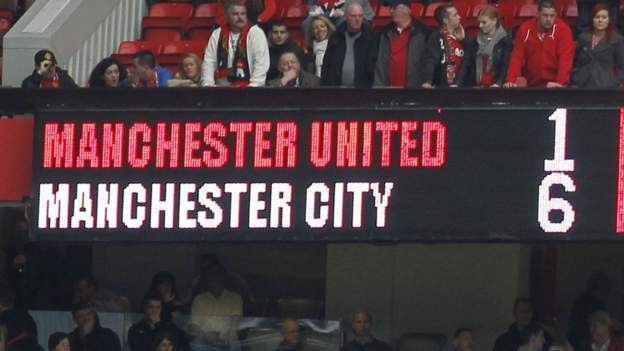 In isolation, Manchester City's famous 6-1 derby win could have been remembered as a freak result best known for one of English football's most iconic celebrations - Mario Balotelli's 'Why Always Me?' T-shirt that he revealed after putting the visitors ahead.

Instead, it has had lasting significance for both clubs, and not just because the margin of City's victory at Old Trafford would eventually see them clinch that season's title on goal difference, ahead of Manchester United.

This was a day that signalled the start of a power shift that has defined the past decade in the city and beyond, with the Blues beginning their land-grab on Red territory, and in spectacular style.

City have emphatically delivered on what was seen then as a statement of intent - their stature and trophy-haul has soared in the seasons since, while only sporadic United successes have followed.

United's era of dominance was effectively ended here, locally and in the Premier League, and as their patchy form and wait for a first piece of silverware under Ole Gunnar Solskjaer continues to illustrate, their old aura is yet to return.

When City were the ones playing catch-up

City had been given that "noisy neighbours" tag by United boss Sir Alex Ferguson in the months after their takeover by their Abu Dhabi owners in 2008 but, more than three years on, they were still used to being silenced by the team up the road.

Yes, Roberto Mancini's side had something to shout about when they beat United at Wembley in an FA Cup semi-final in April 2011 on their way to lifting that trophy, but the ambition of the new Blues regime and a series of expensive signings had not yet altered the pecking order in Manchester.

Sir Alex Ferguson's 'noisy neighbour' jibe at City is believed to have been prompted by their billboard campaign in Manchester city centre after signing ex-United striker Carlos Tevez in July 2009. He made the comparison after United had won the Old Trafford derby 4-3 in September of that year, explaining: 'Sometimes you have a noisy neighbour. You cannot do anything about that, they will always be noisy. You just have to get on with your life, put your television on and turn it up a bit louder.'

Before this game, United had won five and drawn one of their six league meetings with Sheikh Mansour's City, and were also on an 18-month unbeaten run on their own turf, at a venue City had only won once at in 32 visits since Denis Law's famous backheel on the day his old side were relegated to the second tier in 1974.

It all meant City were still seen as the underdogs as they headed down the road to Old Trafford, then the home of the Premier League champions, on 23 October 2011.

What happened next meant they were rarely viewed that way again.

Balotelli gets things off with a bang

If you liked a quiet life, the last person you wanted living next door to you in 2011 was Balotelli.

The day before this derby, firefighters had been called to his Cheshire home in the early hours when a firework was launched in his bathroom and set it ablaze.

The maverick Italian striker, no stranger to the headlines, had actually planned his Old Trafford celebration earlier that week and printed his T-shirt days before those pyrotechnic antics - but it would prove a fitting way to get an explosive day off with a bang.

More rockets would follow. City only led 1-0 at the break but took full control when Jonny Evans was sent off for hauling down Balotelli early in the second half, and were 3-0 up with 21 minutes to go.

United had recovered from 2-0 down to beat City in the Community Shield in August so they were not done yet, but their record of rescuing seemingly lost causes proved their undoing on this occasion, after Darren Fletcher reduced the deficit to 3-1 with nine minutes left.

The hosts left huge gaps as they went looking for more goals, and were ruthlessly punished by David Silva (89 minutes) and a stoppage-time salvo from substitute Edin Dzeko (91 and 93).

Dzeko's second was the pick of the bunch, as he ran on to an exquisite volleyed pass from Silva before slotting home and celebrating with a six-fingered salute in front of a United banner reading 'MUFC - Not Arrogant, Just Better' which made for an ironic backdrop on a surreal day.

"We just kept attacking," a wistful Ferguson told the Sky Sports cameras straight after the final whistle. "At 4-1, we should have just said 'we've had our day' but we kept attacking with our full-backs forward and leaving them three against two. It was crazy, crazy football.

"It was a bad day, no doubt about that. It's our worst ever day. With the nature of the club, we will come back but the thing that concerns me the most was the goals for and against now - it was 10 goals the difference today.

"That was a big blow for us because you never know, goal difference may count. Most years it is in our favour but, at this moment in time, it's not."

Ferguson was right, of course, because the damage was done - this scoreline would prove decisive even with all the drama to come on the final day of the campaign.

On top of that, City's fear of Old Trafford was over - and it has proved to be a happy hunting ground for them ever since.

The 2011-12 season was the first time the Premier League title had been decided on goal difference - City's ended up being eight better than United's. If City had won 2-1 rather than 6-1 at Old Trafford, it would have left both sides with exactly identical records and meant a play-off was needed'This city is ours'

Understandably, City fans still regularly sing about the game, with verses about how each goal their side scored from 3-1 onwards was greeted by a further exodus of thousands of United fans.

It includes the claim - tweaked here with a rude word replaced - of "you lucky devils, it should have been 10".

That part is up for debate, but the song's final assertion that "this city is ours" is currently less in doubt.

'This is our City' - since winning 6-1 at Old Trafford exactly a decade ago, the Blues have had the upper hand over United in terms of trophies, league positions and head-to-head meetings

Historically, both clubs have enjoyed eras where they were clearly Manchester's dominant force and, based on their respective finishing league positions, City were actually the early frontrunners.

That all changed with this drubbing and although United would reclaim the Premier League in 2013, that remains their last title. Their fans have had to get used to looking up the table, not down, to find City - who have finished above them nine times out of 10 since winning 6-1, including each of the past eight seasons.

Results-wise, overall City only edge the subsequent head-to-heads 11-10, but now rule the roost on United's patch at Old Trafford where they have prevailed on five of their nine league visits since 2011, losing only twice.

In all competitions, City have won seven out of 12 matches there, with just three defeats, and they will go back on 6 November as favourites to triumph again.

It will take something very special for them to outdo their deeds of a decade ago, while the on-going challenge for United is to find a way of muting them.