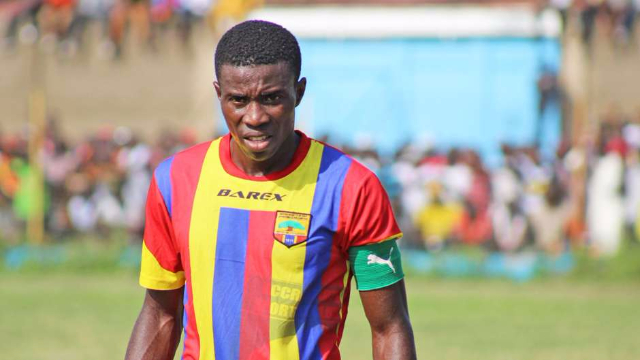 Former Hearts of Oak captain Thomas Abbey has rendered an apology to the Phobian fraternity over his disclosure about the cause of their defeat against Asante Kotoko in the 2017 FA Cup final.

On Thursday, Abbey hogged the headlines in Ghana following his assertion that salaries and bonuses owed the team prior to the FA Cup final in Tamale in 2017 contributed to their disappointing 3-1 loss against sworn adversaries Asante Kotoko.

Abbey's comments did not go down well with several ex-players of the team including Vincent Atinga, Winful Cobbina and Samudeen Ibrahim, who came out to lambaste their former skipper for spreading 'lies' against the club and his teammates.

Upon reflection, the former Ismaily forward has implored the Accra-based giants to find a place in their hearts to accept his apology.

“I did not make the comment with any bad intentions but was asked about the factors which led to our loss to Kotoko which included unpaid salaries, winning bonuses and contract renewal of some players. It was an off-air interview, I was recorded secretly,” Abbey told Kumasi-based Fox FM.

“I will like to plead on all fans of Hearts of Oak to forgive me. I had no bad intentions regarding my comments. I had no issue with the team during my playing days, they treated me very well. They should forgive me."

He continued: “I am really sad and feel so sorry for making that comment, I said it with good heart but with no bad intensions. We did not take any money from anyone before the game as I have already told you earlier, we were down spiritually before leaving Accra for Tamale. If I played softly you would have noticed, I even scored our consolation goal on the day.”

“I know the Hearts family is really worried and sad with the comments I made but I will plead with them to find a place in their hearts to forgive me. There was unpaid salaries and bonuses but we were given the money after the game.”

Abbey further stated, “There is no truth that we had intentions of losing even before the commencement of the game because we knew that was the time we had reached a final in about ten (10) years. We were all sad after the game. I even collapsed five (5) minutes after the game without anybody’s intention because I was worried on our loss to Kotoko,”

“We could have made good names in the legendary books of Accra Hearts of Oak. On our way back to Accra, I was not of myself but by God’s grace we got home safely,” he revealed.

“I am still on apology, I had no bad intensions, they should forgive me with my comments so that we can continue with love and friendship.”