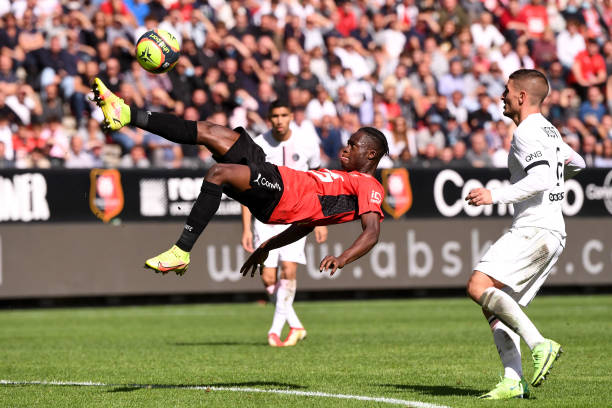 Recruited for 15 million euros last summer, Kamaldeen Sulemana is clearly gaining momentum with Rennes. The Ghanaian winger remains on very high performance and is already positioned as one of the best players in Ligue 1 at his post.

Jérémy Doku's first season took several months to start. Kamaldeen Sulemana (19) took much less time to adapt to his new environment in Rennes. Like the Belgian, the Ghanaian was eagerly awaited, he who was the subject of a transfer of 15 million euros.

Like the Red Devil, the Black Star has shown he has fire in his legs. A month of madness for Sulemana After a few sluggish performances, the twirling winger is definitely launched. Its performance over the past month has shown that the Breton club was not mistaken in going to look for him on the side of Nordsjaelland.

Double scorer against Clermont (6-0), Sulemana turned the Europa League Conference meeting against Vitesse (2-1) by offering the victory to his people when he came into play in the second half, before shining against Paris Saint -Germain (2-0), three days later, delivering an assist to Gaëtan Laborde.

His first outing after the international break has a little more confirmed the beautiful things seen at the beginning of the autumn. Indeed, the Breton was absolutely untenable against Metz (3-0) on Sunday. Irresistible, he made a nightmare for Matthieu Udol, whom he mystified with a small point before continuing with a terrible strike from the outside of the foot under the bar for Rennes' second goal.

Incessant provocations, availability at all times, the native of Techiman has done very badly. J. Martin - " it's a crack".

Already a five-time scorer since his arrival, Sulemana is unanimous in the locker room. It is enough to listen to Jonas Martin to understand the admiration of Rennes for the summer recruit.

“Kamaldeen Sulemana is a crack. He is a player like there are not many in the teams. He is capable of creating situations on his own, there is no need for many people around him," appreciated the former Montpellier player in remarks taken up by Ouest-France.

With Sulemana, Laborde and Doku, the SRFC has quite a trio for the future.