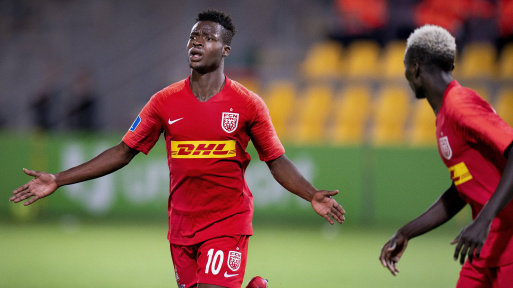 The youngster had received massive interest from Dutch side Ajax and Manchester United with talks of a possible move to the Johann Cryuff Arena on the cards.

Ajax Technical Director Marc Overmaars had visited Denmark to watch the Ghanaian youngster with a report of a bid rejected by Nordsjaelland in January.

Kamaldeen Sulemana recently visited Ajax, but he left the club without having signed a contract, and subsequently he has visited the French club Stade Rennes.

He was rumoured to be heading into the English Premier League where the likes of Manchester United, Southampton and Liverpool have all shown interest.

In what is expected to be a major coup, Rennes have won the race to snatch the Ghanaian youngster who was close to joining Ajax.

The French side have offered 21 million euros to sign the former Right to Dreams graduate which is likely to be a record transfer fee for an African youngster.

Kamaldeen is likely to undergo a medical in the coming hours to secure his move to the French Ligue 1 side.

Signing for Rennes will be a big coup for the French club who last summer beat the likes of Liverpool to the signature of the Belgium attacker of Ghanaian descent Jeremy Doku.

French Lique 1 Rennes entered the race for the signature of the talented speedster - who has delighted the world with his immense talent and quality.

The Ghanaian youngster has already received an offer from Ajax, but could be subject to more offers soon, with Ligue 1 club Rennes joining the race.

According to French sports daily L’Equipe, Rennes view Sulemana as an ideal candidate to bolster their options on the flanks and are prepared to join the chase for him.

The French top flight club will have to go up against Ajax, as well as Liverpool and Manchester United, if they are to land the Ghanaian forward this summer.

Nordsjaelland are holding out for an initial fee of €15m for the sale of Sulemana and want a deal worth up to €20m after bonuses.