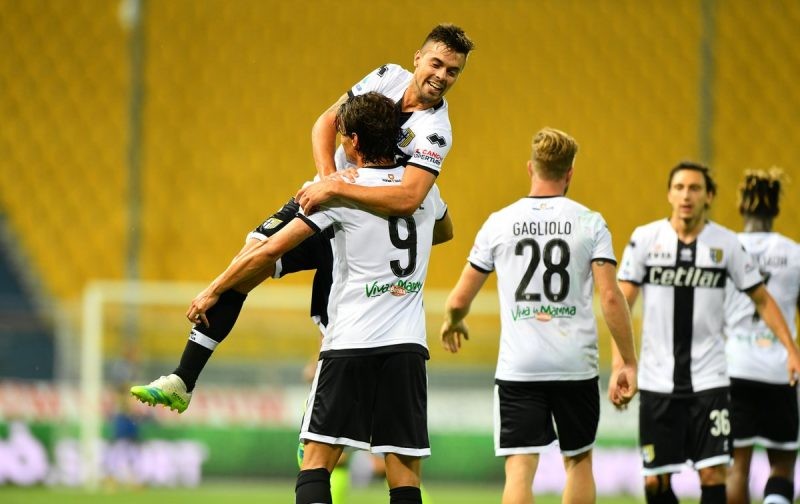 STADIO ENNIO TARDINI (Parma) – Nobody who follows Parma closely will be surprised that it’s them who have scored more stoppage-time goals than anyone else in Serie A this season.

Jasmin Kurtic and Roberto Inglese bagged their sixth and seventh on Sunday evening as the Crociati came from behind in the Derby dell’Emilia to draw 2-2 with Bologna.

Undoubted experts at serving up late drama, Sunday’s display was remarkable even by Parma’s high standards, having to score twice in stoppage time to complete a comeback after what had been an underwhelming performance. Sassuolo, Torino, Brescia and Roma had all already conceded a goal later than the 88th minute at the Tardini this season, with those against the Neroverdi, Il Toro and the Rondinelle changing the outcome of the game in Parma’s favour.

A Mehdi Bourabia own goal saw the Crociati take all three points in the 95th minute, as did Inglese’s 89th-minute strike against Torino, while Alberto Grassi clinched a point in the 92nd minute against Brescia.

Reporting on Parma with the aim of publishing an on-the-whistle report has become a game of chicken in 2019/20. The late drama is coming, it’s unavoidable, but the start time for fine-tuning that soon-to-be scrapped first draft of a report edges closer to the 90-minute mark every week.

First it was on 75 minutes, then it hit 80 and, soon after, 85. It was 90 on Sunday, but it was still too soon. Even when you think you’ve beaten them and have that draft ready to go, when you feel as though you’ve waited long enough so that a result-changing comeback is impossible, Parma find a way.

For the sixth time this season, a goal in the dying minutes changed the result at the Tardini as Parma completed a stoppage-time comeback to draw in the Derby dell’Emilia. ?@ConJClancy was there for #FIFattheGames.

Bologna, too, would have felt like hapless victims of a higher power at the Tardini.

They prevented their hosts from getting a shot on target until Grassi forced a save from Lukasz Skorupski in the 81st minute, hadn’t blown a two-goal lead since January 2016 against Lazio and they had never in their history conceded two goals in stoppage time.

The Rossoblu scored the earliest goal against Parma since Mario Madzukic’s for Juventus in September 2018. But they went on to concede two of the latest goal that even the last-minute specialists will score this season in another Tardini special.

After 286 days, Roberto Inglese was back on the scoresheet for Parma with another crucial goal.

It was his third of the season, which isn’t a bad return from just 639 Serie A minutes.

Since joining the Gialloblu at the beginning of the 2018/19 campaign, the No.9 has had five injuries which have seen him sidelined for 329 days, meaning he’s been fit for around 50 percent of the time he’s been at the club.

He returned on Sunday for his first appearance in 176 days, and the joy felt for him at the Tardini when he scored was palpable.

His goal was celebrated three times – first when the ball hit the net, second when the realisation that it was him hit everyone there and third when the final whistle blew seconds later.

From those in the dugout to the club delegates in the stands and even Parma’s own media representatives in the press box, Bobby’s name was being shouted around with delight. The forward brings something to the XI that they don’t otherwise have and as well as being a physical presence leading the line, he has a technical level above that of Andreas Cornelius and, as he’s shown with Chievo in the past and Parma when fit, he’s got an eye for goal too.

With 12 goals and three assists in 2,741 minutes across 39 appearances for the Crociati, Inglese has a direct hand in a goal every 182 minutes, or every other game.

Roberto D’Aversa had everyone in the press box, and those watching on TV, speculating when he named his XI.

It had been reported in La Gazzetta dello Sport that he would set out with his usual 4-3-3 but with Matteo Darmian, Juraj Kucka and Mattia Sprocati leading the line.

Those three were named from the start, but he instead set up in a 5-3-2 formation, which didn’t work.

Parma’s 4-3-3 has served them well in the two years they’ve had in Serie A, and only after reverting to that in the second half did they show signs of life.

Hernani and Matteo Scozzarella were completely overrun in the first 45, and they lacked incision in possession.

When it comes to rotating in the future, it’s unlikely that D’Aversa will veer away from his tried and tested 4-3-3 again, at least until after a pre-season when they might get the chance to add some more strings to their bow.