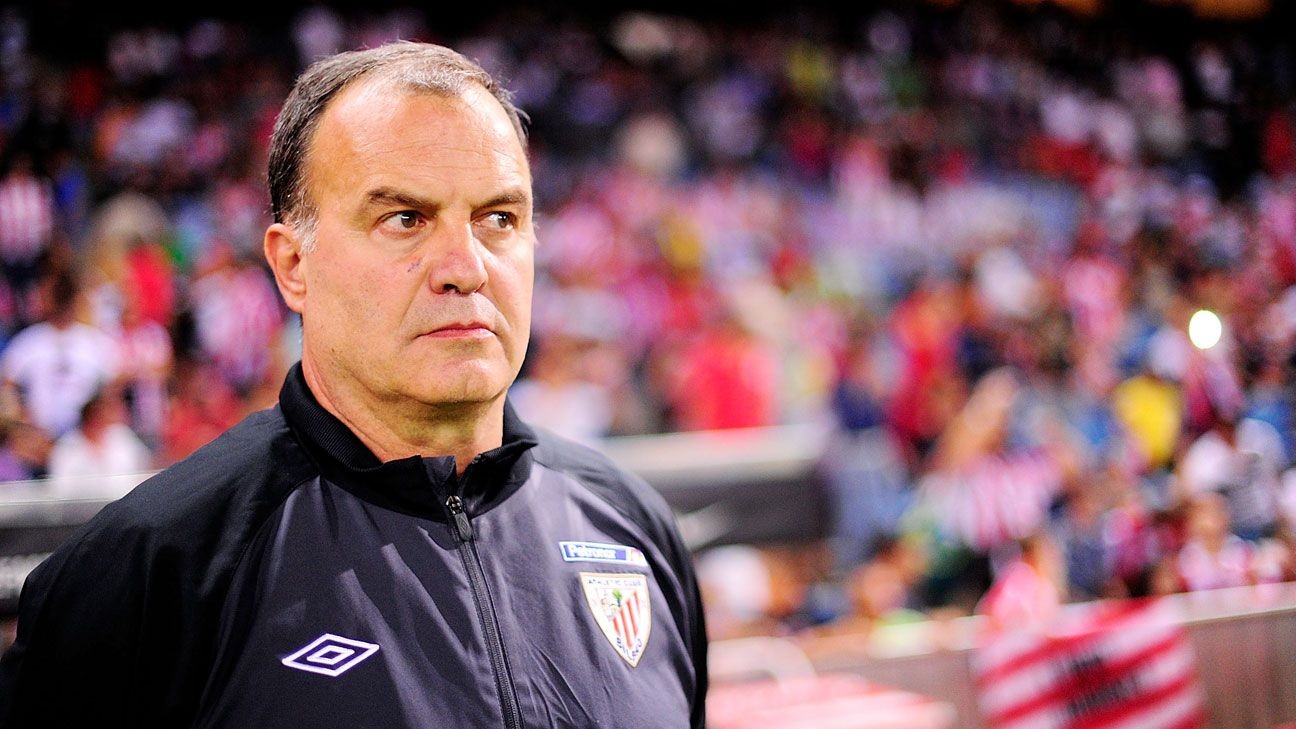 In his presentation for the head coach job at Athletic Club, Marcelo Bielsa said he's learned from his various jobs across Europe and that this Bilbao squad suits him. Gonzalo Arroyo Moreno/Getty Images

We've all been there. Sitting for what feels like forever, watching as the presentation goes on and on, page after PowerPoint page of statistics and results, seas of numbers on the screen, a voice going through it all in minute detail which you've long since stopped listening to, drifting a little now.

Only this was different. This was better: this was Bielsa.

On Monday, Marcelo Bielsa was presented as the new coach of Athletic Club -- if Inaki Arechabaleta is voted in as president in Friday's elections. Which, for a little while there and for that very reason, it seemed certain that he would be. How could he not be? He had Bielsa -- Bielsa! -- while the other candidates, Ricardo Barkala and Jon Uriarte, had ... well, they didn't have anyone. Not yet.

Arechabaleta said that when he had approached Bielsa to join him in his bid for the presidency of Athletic, the Argentinian coach replied by asking him for time. The best thing, he had replied, was for the current coach Marcelino Garcia Toral to continue and anyway, he needed to be able to study the proposal. So he did. Marcelino didn't continue -- in part because he knew there was an election campaign coming and he didn't really want to be part of it -- and now here was Bielsa presenting his findings.

He hadn't come to Bilbao, and there were no interviews, no standing there smiling with a scarf, no handshakes and greetings. No round of questions or interrogation, except the one he did himself. Instead, it was done by video, all graphs and graphics. In a room in Bilbao or following it online, they watched Bielsa sitting before them, slim, his hair very short, doing what Bielsa does: talking very, very slowly, taking them through his analysis. It was just like him, and they knew that: Arechabaleta's proposal was for him to take over for a second time, having been at the club between 2011 and 2013.

The first time, Bielsa had done a presentation too. That one was live: there was the classic connection problem and then Bielsa had to excuse himself briefly to pop to the toilet. This time was prerecorded, running all the way through.

He had watched 45 Athletic games last season, he said. 45 Athletic games, 38 B team games, four C team games, and three from the U19s. He had watched every team Athletic will face too -- except Girona, whose promotion came too late to be included -- and had worked out every detail. He ran through the number of times each player was involved, talked about structures, players, and emotions, ways of reaching them, ways in which his methods had evolved. He talked and talked, for an hour and ten minutes.

He insisted that this team was already good: "They play well, I like them," he reiterated, "and the best thing would have been for Marcelino to continue." And yet the promise -- except that Bielsa never really makes promises -- was that this might be even better, better than this current side under Marcelino and better than the side that Bielsa coached before. This squad, he said, would suit him even more than the first one he had.

It's an attractive idea. That one, after all, had reached the final of the Europa League and the Copa del Rey. At Old Trafford, they had beaten Manchester United having produced pretty much the best performance anyone could remember. There was a connection there, a sense that this man who did not appear at first to fit at all came to fit very well indeed. They had all finished exhausted, it was true, but it had been some ride. Asked once if Bielsa was really as mad as people said, Iker Muniain had replied: "No, he's madder." But the fans loved him for it. At the end, they had sung for him to stay, but he went.

As a player, Ernesto Valverde scored 50 goals for Athletic Club, and in his second stint in charge, led them to a Super Cup title. Could he return for a third time as head coach? Photo by Juan Manuel Serrano Arce/Getty Images

Now he's back. Or at least he could be, if Arechabaleta wins, and not many would vote against that now. Even with the other doubts around his candidacy -- who is the sporting director? which players is he interested in? -- or his character, he had Bielsa.

"He's in the top five coaches in the world, the man most venerated by professionals and coaches. And we're talking about a Marcelo for the future, not the past," Arechabaleta insisted, which didn't stop him noting that the Marcelo of the past had delivered what he claimed was the club's best season this century.

This had revolutionised everything, people going mad. Not just there: suddenly all over the place everyone was talking about it, about Athletic. It also seemed to pretty much end it. Arechabaleta had gathered the fewest signatures to date as a rough indication of support: Fidel Uriarte had 6,041, Ricardo Barkala 4,054, while he had 2,987. But this felt decisive, almost done. How could you beat this?

Perhaps like this? Earlier in the campaign, the name of Mauricio Pochettino had briefly emerged as a possibility under Barkala, but now, two days after Bielsa's presentation, the other two candidates both announced that their manager would be Ernesto Valverde. If they won, he would return for his third spell at the club, after 2003-05 and 2013-17. He had followed Bielsa last time, a welcome relief, and had been hugely successful, taking them to a Champions League place and the Spanish Super Cup, Athletic's first trophy in thirty years. Now Valverde was offered up in opposition to Bielsa.

Like Marcelino, Valverde had not wanted to be involved in a campaign which always risks division. He had intended to keep out of it, which didn't mean not becoming the coach, and always available when they needed. Now though, he had agreed to join both candidates that had contacted him. That it was both was for a reason: "It had to be inclusive, not exclusive," he said.

Ahead of the presidential vote, fans and players of Athletic Club will hope that a return of either Bielsa or Valverde spells hope for the future. Getty Images

Valverde hadn't coached since he was sacked at Barcelona, having won two LaLiga titles and Copa del Rey. Barcelona have won nothing since; he has mostly kept out of the way. After Barcelona, there was a moment of escaping, seeking your own space -- he brought out a new collection of his photos -- and then the pandemic came. "It's not that I have locked myself up at home; everyone has," he said.

Valverde is a manager able to normalise the tension, the pressure, to somehow rise above it, an ease about him which is part of the reason he has achieved so much. After Bielsa, he brought air, breathing room, which was much needed -- and success.

There's something admirably down to earth about him, not a hint of ego, which may not always have helped him. There's no sales pitch, quite the opposite; no willingness to walk out when it suits him, either. Bigger jobs have been rejected because he felt it wasn't right. He could not be more liked in Bilbao, but at times it can seem like people don't talk about him enough elsewhere, in part maybe because nor does he. Since Barcelona, the offers that came have not continued to come; this is not a manager desperate to work anywhere.

But Athletic is not anywhere, it is everything. From outside, it is not always appreciated but this is a huge club. "What Athletic means in Bilbao, in Vizcaya, I have never seen in any place," he says.

And so here they are again. There is more to discuss -- not least the huge damage done to Jon Uriarte's campaign after his proposed sporting director Carlos Avina was sacked following the airing of sexist, racist, and homophobic tweets he had written -- but now it feels almost like a straight head to head and between two men whose reputation could hardly be higher.

Now they have to choose. With Bielsa's announcement, it seemed done. With Valverde's, it doesn't. Ironically, the thing that most goes against him may be the very fact that he's in two candidacies, "his" vote split.

Either way, Athletic have a man they love coming back. But will it be the same?

"Sequels were never any good," Valverde said when he returned last time. "Well, apart from the Godfather Part II."