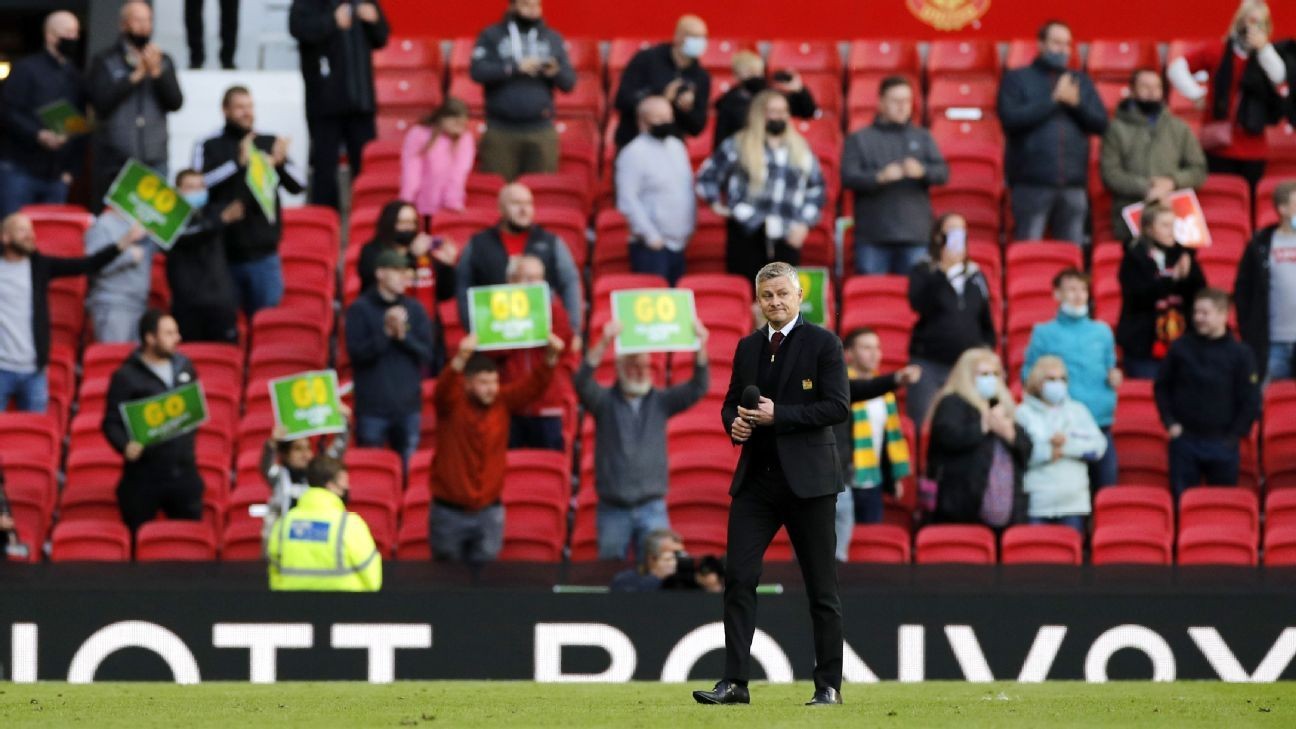 MANCHESTER, England -- Manchester United did their best to host an evening of celebration on Tuesday, but problems on and off the pitch still took centre stage.

Supporters returned to Old Trafford -- this time legally -- for the first time in 437 days and they didn't miss their chance to continue the protests against the Glazer family. Meanwhile, relegated Fulham became the latest team to leave with a positive result, securing a 1-1 draw. Ole Gunnar Solskjaer's team have shown signs of progress but United's home record in the league this season reads: played 19, won nine.

Before kickoff, Bruno Fernandes and Luke Shaw were presented with the club's player of the year awards and Edinson Cavani marked his first game in front of the United fans with a goal so good it was almost worth the wait. But through it all, the protests remained and Joe Bryan's late equaliser ruined any chance of signing off with a win before the trip to Wolverhampton Wanderers on Sunday and the Europa League final in Gdansk.

ship erupted in the wake of the European Super League mess a month ago, and with 10,000 fans back at Old Trafford for the first time since March 8, 2020, he used his programme notes to appeal for calm.

"Events over the last couple of weeks have been difficult at times," he wrote. "I hope everyone will unite behind the team this evening."

For the most part they did, and Cavani's goal -- a 40-yard lob towards the Stretford End that couldn't have been judged any better if he'd had a tape measure -- was greeted with a roar that felt like it had been generated by 100,000 voices rather than a tenth of that, but the anti-Glazer message was never far away. Green and gold signs reading "Glazer Out" were distributed outside the stadium and held up as the players walked out for kickoff, and during a break in play midway through the first half, each side of Old Trafford stood up to chant "we want Glazers out" and "love United, hate Glazer."

Joel Glazer has a long way to go if he really wants to "build trust" with United fans as he says he does. The majority of supporters will believe it when they see it.

Fans made their displeasure with Manchester United ownership known upon their return to Old Trafford on Tuesday. Phil Noble/PA Images via Getty Images

The owners have promised investment to refurbish Old Trafford and the training ground at Carrington, but Solskjaer will also need money to spend on the squad if he's going to take another step forward. Third last season and second this time, confirmed after Chelsea's win over Leicester City later on Tuesday, the only thing left is a sustained title challenge, but he needs more players. The home form will also have to improve after dropping 26 points this season.

"The buzz, the energy, the atmosphere [from the fans] was fantastic," said Solskjaer. "To have them back, you felt them and the buzz of people just talking. We've really missed it but maybe that was part for the reason we played the way we did. I felt we played too much for entertainment at times.

"Definitely there was the period we should have stamped our authority more on the game and in the Premier League it's never given. We've gone for it but couldn't get the three points we desperately wanted to go into the next week full of confidence."

The more immediate concern for Solskjaer is the fitness of Harry Maguire, Scott McTominay and Fred ahead of the Europa League final against Villarreal in a week's time.

Maguire is nursing an ankle ligament injury and despite Solskjaer's optimism, the England defender is still on crutches and didn't look comfortable negotiating the stairs on his way to his seat in the stands. McTominay was substituted in the second half against Fulham after picking up a knee injury and central midfield partner Fred also picked up a knock.

McTominay and Fred will have to be assessed, and asked afterwards about Maguire's chances of facing Villarreal, Solskjaer said: "It looks difficult, let's put it that way." Whether his captain is available or not, Solskjaer knows that after two defeats and a draw in the past seven days, lifting his first trophy as United manager is not a foregone conclusion.

"We need to play better against Villarreal," said Solskjaer. "I think it might be a wake-up call."

He can only hope it is.