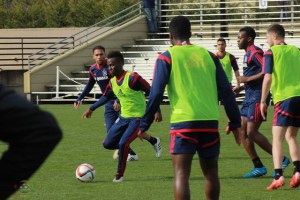 David Accam has been training with English club Stoke City, sparking runours of an imminent move for the Ghana striker.

The 25-year-old has just completed his debut season in the Major League Soccer with Chicago Fire.

Accam moved to England to train with Stoke City in his bid to remain fit.

He has also played a low-keyed internal friendly match for the Potters.

This has sparked rumours of a €4m offer for the Ghana international.

The former Helsingborg star however does not qualify for automatic work permit which makes a move even more difficult.

Chicago Fire will be interested in a loan deal to keep their striker fit and also to make some money off the side.

Accam joined Chicago Fire earlier this year and emerged one of their top performers by scoring 10 goals in 24 league appearances.