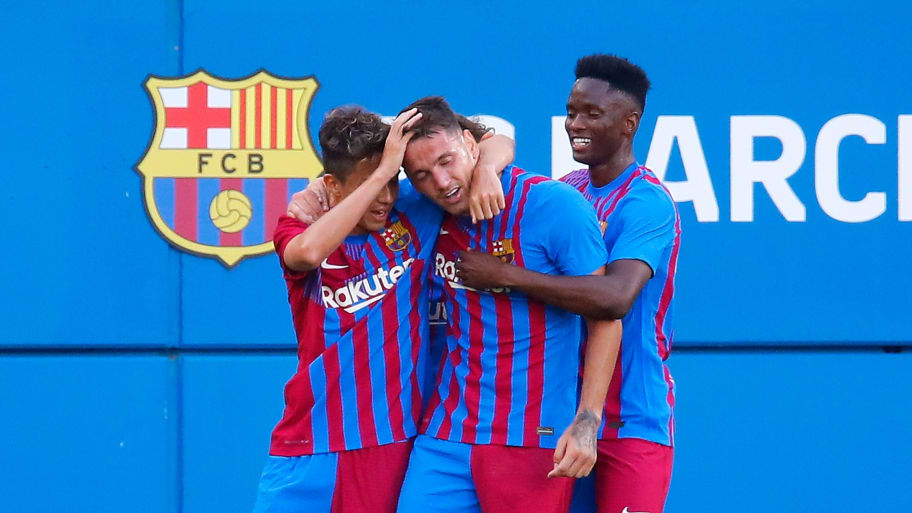 Barcelona kicked off their pre-season with a 4-0 win over third-tier side Gimnastic on Wednesday evening, with substitute Rey Manaj's second-half hat-trick stealing the show.

Ronald Koeman was without a whole host of his big hitters for the clash at the Johan Cruyff Stadium, with the squad members who competed at Euro 2020 and the Copa America still yet to return to club duty.

Names like Lionel Messi, Sergio Busquets and Pedri were subsequently absent from the team sheet, meaning both Sergi Roberto and Miralem Pjanic started in midfield despite continued doubts over their respective futures at the club.

Barça's weakened team struggled to break the deadlock early on and, despite dominating possession and peppering Manu Garcia's goal, they were unable to find a breakthrough and were forced to head for half time with the scores slightly embarrassingly locked at 0-0.

Koeman wasted no time in looking to shake things up, making no fewer than 11 changes at half time as he sent out a completely different team to the one that started the contest.

The changes immediately paid off, with Manaj grabbing the first goal of the game with an hour gone. Having collected the ball with his back to goal, the former Inter man swivelled and fired an unstoppable effort from an acute angle, leaving the recently introduced goalkeeper Alvaro Gonzalez with absolutely no chance.

Barcelona had to wait until the 85th minute to put the result beyond doubt, with youngster Alex Collado doubling his side's tally with a powerful low drive that took a deflection before finding its way into the back of the net.

Having held out for so long, Gimnastic crumbled after Barça had made it 2-0, with Manaj bagging his second of the evening just a minute later to make the score 3-0 to the home side.

There was just time for Manaj to complete his hat-trick in the 90th minute as he slotted home from the penalty spot, handing Koeman's side a comfortable 4-0 win to kick off their pre-season campaign.

This article was originally published on 90min as Rey Manaj bags hat-trick as Barcelona cruise to comfortable 4-0 friendly win .