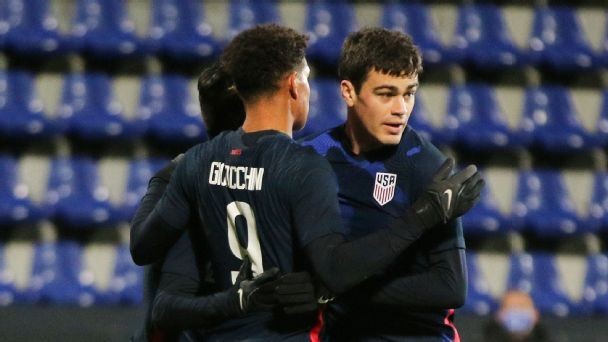 Giovanni Reyna and Nicholas Gioacchini both scored their first international goals as the United States beat Panama 6-2 in a friendly in Austria on Monday night.

The second youngest U.S. team ever fielded started brightly but found themselves trailing inside of 10 minutes when Jose Fajardo's glancing header from a Alejandro Yearwood beat Zack Steffen to give Panama the early lead.

The Americans got back on level terms 10 minutes later when Reyna scored from a free kick at the top of the penalty area after Yunus Musah was brought down following a nice run at the Panama defense.

The goal was Reyna's first in his U.S. career and came just days after his 18th birthday.

Gioacchini then fired the U.S. in front with his first international goal, pouncing on a rebound from Uly Llanez's shot after some sloppy play out of the back from Panama.

Now firmly on the front foot, the U.S. made it 3-1 in the 26th minute with Gioacchini netting his second with a close-range header following some neat build-up play in the penalty area.

Panama came out of half-time trailing by two goals and looked dangerous in the opening 15 minutes of the second period, but were unable to find another goal.

Gioacchini had a chance to make it a hat trick on the night, but he missed from the penalty spot after Panama's Oscar Linton was whistled for hand ball in the area.

Panama clawed one back before the 80-minute mark in a bizarre sequence that saw Fajardo break free in the U.S. area with only Steffen to beat and he sliced a left-footed volley into the net to make it 3-2.

Substitutes Sebastian Soto and Richie Ledezma put the game away soon after the Panama goal, with the former meeting the latter's cross in the box and heading home.

And Sebastian Lletget made it 5-2 before full-time with a header of his own, before Soto headed in his second from Ledezma again to reach the final scoreline.

On Sunday, U.S. manager Gregg Berhalter hinted that the team was looking to schedule one more friendly before the end of the year, likely to be played on home soil.