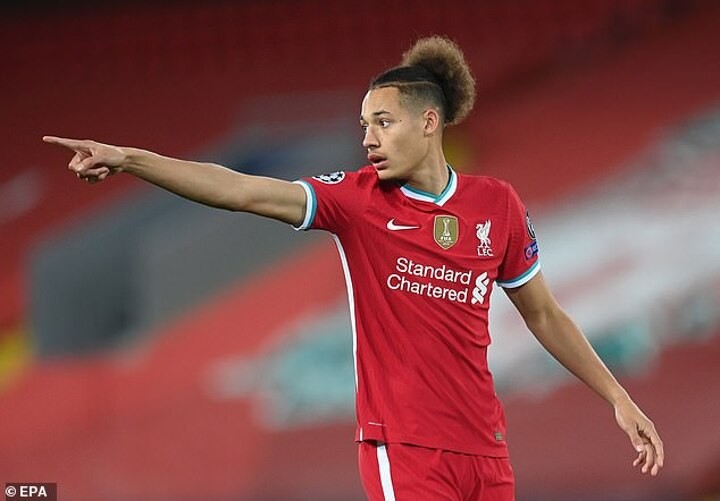 What a difference a week makes. In Amsterdam seven days ago, Jurgen Klopp stood with arm around Rhys Williams and smiled as he imparted some final wisdom.

Liverpool’s manager knew what an experience he was giving to a 19-year-old, who is making his first steps in football at the highest level. Here was Williams, in one of the sport’s cathedrals, being given the responsibility to help his team through injury time.

‘I saw it in his eyes that he was pretty impressed by the occasion,’ Klopp reflected.

Williams had every reason to be impressed. The first thing he did when introduced against Ajax was win a towering header. They think an awful lot of Williams at Liverpool and the fact Klopp was prepared to put him into a pressure situation spoke volumes.

Here, though, the body language was different. Klopp could not have envisaged having to ask Williams to get stripped and ready for action so soon into Liverpool’s second Group D fixture against Midtyjlland but circumstances left him with no option.

There was Fabinho, the man who had been ushered into central defensive duty following the catastrophic injury to Virgil van Dijk, lying with his legs out stretched. He was wincing in the way players tend to when they know they have felt something tweak, tear or pop.

So Klopp pointed to Williams. He then pointed out to the pitch, he thumped his hand into young man’s chest and he asked him to go out and help Liverpool negotiate a problematic game. It was also a problematic situation, for this is now a defensive crisis.

Van Dijk’s plight has been well documented but the absence of Fabinho – who was outstanding in Amsterdam – to go with the brittle nature of Joel Matip, who has not been sighted since the Merseyside derby, means Williams is poised for more game time than he could have envisaged.

This time last year, he was on loan at Kidderminster Harriers and playing in games against Farsley Celtic and Darlington. He had been part of Liverpool’s FA Youth Cup winning team in 2019 but the club decided that his education would be best served by a spell playing man’s football.

The move was the idea of Julian Ward, Liverpool’s loan and pathways manager, and he watched Williams regularly during his 12 months at Aggborough Stadium. He knew when Williams returned to Anfield this summer that the move had worked perfectly.

Age is no barrier for a player with talent with Klopp and an indication that he felt ready to give him more of a role with his senior squad came at Sincil Bank last month, when he partnered Van Dijk in a 7-2 Carabao Cup win over Lincoln.

Last weekend, he played for the Under-23s at the club’s Kirkby Academy base, scoring a towering header in a 3-1 win over Chelsea. This Saturday, however, he is in line to face West Ham, whose attack will be spearheaded by the in-form Michail Antonio.

If it comes to it, Williams will not be flustered. He reads the game well – one interception in the 57th minute caught the eye – he makes sensible passes and he also benefited from having the calming presence of Alisson Becker behind him and Joe Gomez alongside.

A couple of minutes in Amsterdam might have whetted Williams’s appetite but now he is poised to be on the biggest stage of all. Opportunity has knocked and he is ready to answer..