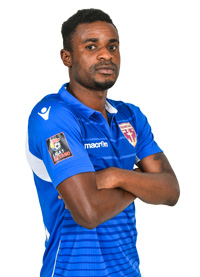 Ghanaian forward Richard Gadze scored his fifth league goal for FC Voluntari in their 4-2 win over Sepsi in the Romanian top-flight league on Sunday.

Voluntari have endured difficult period in the ongoing campaign after picking just 16 points in 22 games.

Coach Cristiano Bergodi's side went into the game against Sepsi with the aim of extricating their ailing campaign after recording one victory in their last nine league games.

They were given a 14th minute lead by Portuguese defender Ricardinho but were soon pegged back by Ibrahima Tandia's 24th minute strike.

Alexandru Tudorie handed Voluntari the cushioning in the 78th minute before Yasin Hamed pulled a goal back for the visitors.

Gadze has scored five goals in 13 appearances for the side.