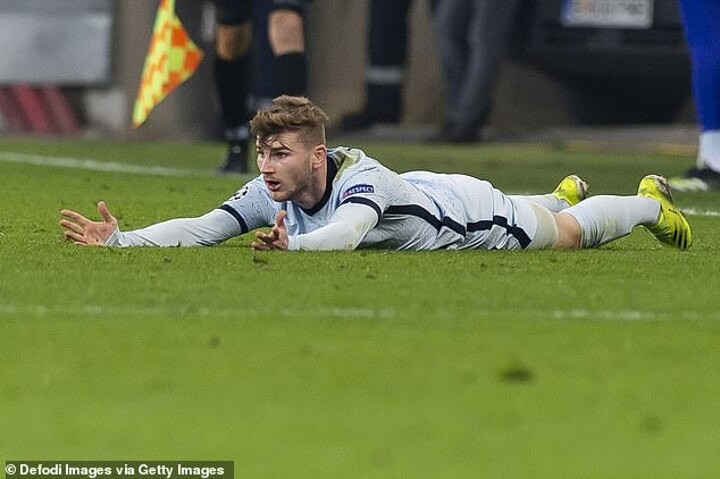 Rio Ferdinand was not impressed with the performance of Timo Werner on Tuesday night, in Chelsea's 1-0 win over Atletico Madrid in the Champions League.

The Chelsea forward has scored 10 goals in 34 appearances this season in all competitions, and fans have been crying out for more from him.

'It's frustrating watching him, because you've seen clips of what he can do,' Ferdinand said on BT Sport, as Werner once again failed to get on the score sheet.

'It's not an easy chance, but you'd like to see him get it on target,' he said of one opportunity after the full time whistle.

Werner joined Chelsea from RB Leipzig in the summer for £57million, and has struggled to hit the same heights he did for his old club.

'Sometimes fast players have to slow the game down a bit,' Ferdinand added. 'They're running so fast everything seems to be a blur.'

And Joe Cole said: 'He's like a young Theo Walcott. So much talent, but it wasn't until the latter stage of his career when he put it all together and started scoring regularly.

'With good coaches, he will start to kick on, we just have to be patient with him.'

Chelsea dominated the game against Atletico Madrid, and take a one away goal advantage into the tie at Stamford Bridge next month.

Their goal came through a spectacular overhead kick from Olivier Giroud in the second half.