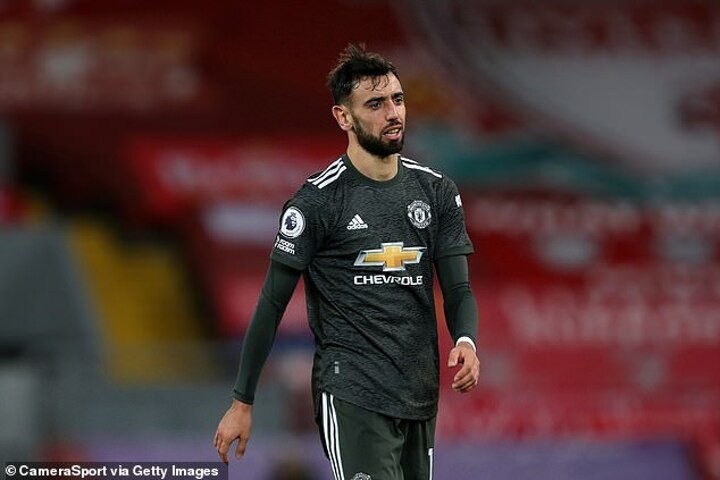 Rio Ferdinand has defended Bruno Fernandes after Roy Keane criticised the midfielder for an uncharacteristically poor performance during Sunday's goalless draw with Liverpool.

Keane was unimpressed with Manchester United's failure to capitalise on Liverpool's injury crisis despite the fact they retained their place at the top of the Premier League table.

Ferdinand disagreed with Keane's scathing assessment of Fernandes and the club, insisting the Portuguese playmaker had been 'phenomenal' for the club.

Keane recognised the importance of Fernandes’s opportunity in the second, but felt Fernandes failed to live up to expectations.

Keane told Sky Sports: 'When I look at the couple of chances United have created, Rashford never turned up.

'Fernandes didn't play that well either, but they still created the two best chances of the game. Huge moments.'

Ferdinand was quick to jump to Fernandes' defence, saying 'can't talk about' him in such a way.

He told Stretford Paddock's YouTube channel: 'They looked off but we’re top of the league so I always look at it like that.

‘If we played this game and had zero shots on target and we looked like we had no threat at all, then I’d be a little bit concerned.

‘But I still think there were moments, it was just the final pass or timing of the pass in the final third maybe a couple of times, and then the finish, they were just a little bit off today.

‘But, listen, you can’t talk about [Bruno]. I wouldn’t say Bruno’s looked off recently. The geezer’s output has been phenomenal.’