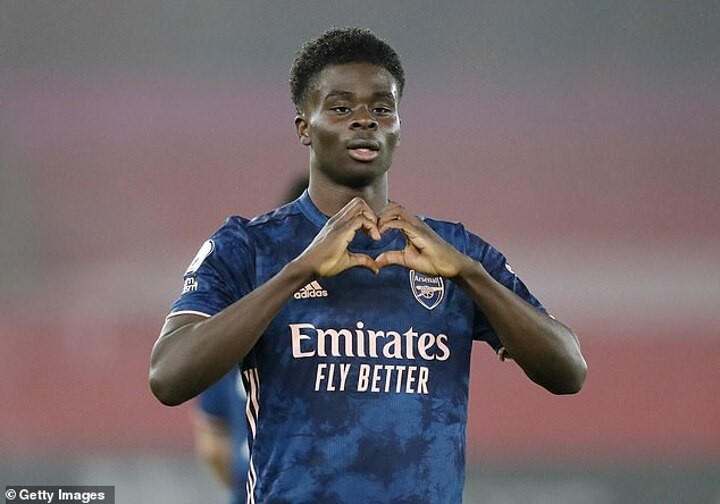 Rio Ferdinand hailed Bukayo Saka's maturity and claimed the teenager is already a leader in the Arsenal team after he helped them continue their good form in a 3-1 victory over Southampton.

The Gunners got their fifth win six Premier League games to lift them up to eighth in the table, with the 19-year-old on the scoresheet for the second and laying on an assist for Alexandre Lacazette's third.

The England international has been a consistent and versatile performer during a troubling campaign for Mikel Arteta's side and is a key reason for their recent turnaround in fortunes.

And his performance in the win against the Saints, which saw them get revenge for the 1-0 defeat they suffered in the FA Cup at the weekend, had Ferdinand focussing on only one man for his post-match praise.

'He was tremendous. His skill, the maturity at which he plays is so impressive as well,' the former England defender told BT Sport.

'What he's doing is more than most in that team and it cant go unnoticed I think Arteta knows his worth and value to this team.

'What’s great about this is, yes Arsenal are bringing young players through but they are bringing them through who are having a massive effect and they are becoming integral to anything moving forward at this club'

Despite still being a teenager, Saka has already amassed 67 appearances for Arsenal after graduating through their academy and is one of the first names on the team-sheet for Arteta.

After making his senior Gunners debut in 2019, Saka has gone from strength to strength and his talent has been recognised for the England national side, with four caps already to his name.

His ability to perform well in several different positions has caught the eye of many after being deployed on the right against the Saints, but has featured on the left, in both defending and attacking positions.

Ferdinand added on Saka's quality: 'He can play one and two touch. Plays off both feet. His decision making, that for me is someone playing well beyond his years.

'You can see that he’s so comfortable wherever he plays. He’s played about 5 or 6 positions in this team already. They’ve been struggling, doing well and struggling all season. He’s been a constant.'

In the aftermath of the victory, Saka said: 'I’m just happy to be playing for Arsenal. It’s a dream so I just have that passion when I get on the pitch.

'The boss makes everything clear for me and gives me the freedom to go and do what I want to do in the final third so I’m really happy with that.

'I’m really happy with everyone, not just Cedric and Laka. Just so happy to get the 3 points here.'