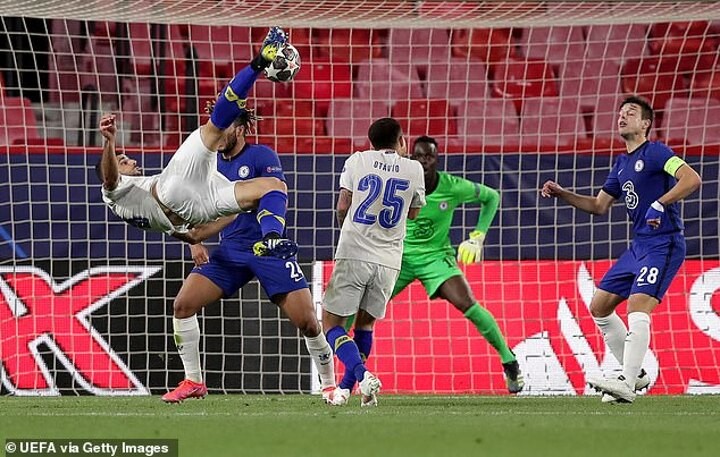 Porto may have been eliminated from the Champions League by Chelsea but Mehdi Taremi made sure they went out in fine style with an outrageous overhead kick.

The striker, brought on in the second half with his side looking to overturn a 2-0 deficit from the first leg, came up with a moment of magic.

Nanu delivered the ball in from the right and Taremi had time to set himself, adjust his body and go for a highlight-reel finish.

Even though slow motion replays showed the ball came off his shin, there was no escaping the brilliance of his effort.

It came in the 93rd minute so was too little, too late for Porto to force extra time in Seville but at least gave them something to smile about.

Back in the BT Sport studio, both Rio Ferdinand and Joe Cole reflected on the wonder-goal.

Ferdinand said: 'It is a speculative ball but the way it lines it up... I think it comes off the shin pad but it's a ridiculous effort.'

With Cole adding: 'It was going to take an outstanding effort, it's inviting and I don't care if it's come off his shin, it's flown into the top bins.

'Talk about ambition, four bodies in the box, that was the first time they had that many in the box.

'They went out with a whimper really. The manager will be kicking himself for not letting them off the leash.'

Taremi has scored 12 goals this season and the Iranian 28-year-old can add his strike against Chelsea to the tally with some satisfaction despite the aggregate scoreline.