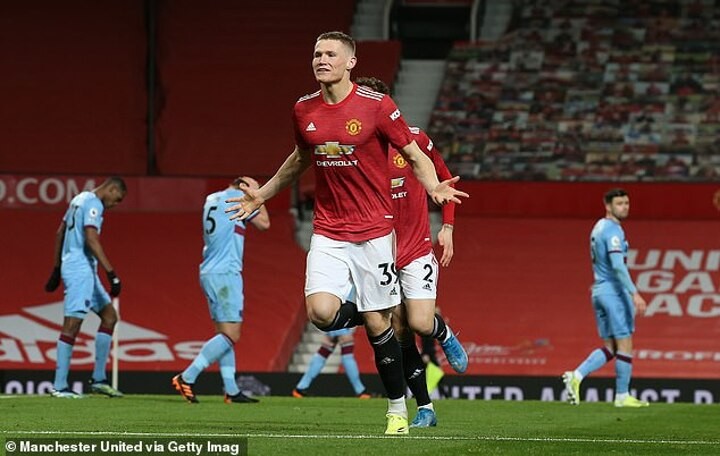 Rio Ferdinand believes Scott McTominay will be able to hold a similar influence at Manchester United as Jordan Henderson does at Liverpool, but warned the team must be 'built the right way' to help him flourish.

Scotland international McTominay has played often for United this season, having been handed 27 starts in all competitions, but faces stern competition at the heart of midfield.

Despite the inconsistencies McTominay has been criticised for at points, Ferdinand views the 24-year-old as a promising player and one who can go on to enjoy a similar role to Anfield regular Henderson.

'I think that McTominay can be and grow into the type of influence that Jordan Henderson has at Liverpool over the last couple of years, if the team is built the right way,' Ferdinand told Vibe with FIVE.

'I think he's got the personality, the character, the right attributes.

'He can cover the ground, takes the ball… yes, he's not a passer like Bruno [Fernandes] or [Paul] Pogba but he doesn't need to be when you've got players like that in your team.'

First-team superstars Fernandes and Pogba have often carried the burden for United's attacking forays through midfield this campaign, with McTominay and usual partner Fred singled out for some sloppy errors.

As a result, Ferdinand wants to see McTominay partnered with another player, namely one more adept at complimenting his abilities.

Ferdinand added: 'He's got no better coach for that position, marshalling the midfield area and giving it to the players in the number 10 roles, etc, than Michael Carrick and Darren Fletcher, who are at the club now.

'Given time he can, but he needs to be put alongside the right personnel and Fred isn't that guy.

'McTominay could have an influence on this team, he's got the character, the personality. Around the training ground he drives a lot of the things that go on in terms of the culture of the club, the voice.

'He's very confident, got a good nature about him, works hard, got a good work ethic. They're the kind of traits you want to see. He brings value.

'He's good at a lot of the things that the other players don't bring.'

Henderson, a key face for England, sported the captain's armband for Liverpool's Premier League success last season, and also led from the fore during their Champions League-winning campaign.

McTominay, meanwhile, will look to play a part in United lifting the Europa League this month.

A raft of team-mates will also hope to get the nod from Ole Gunnar Solskjaer, however, with Nemanja Matic, Donny van de Beek and Juan Mata on the fringes.