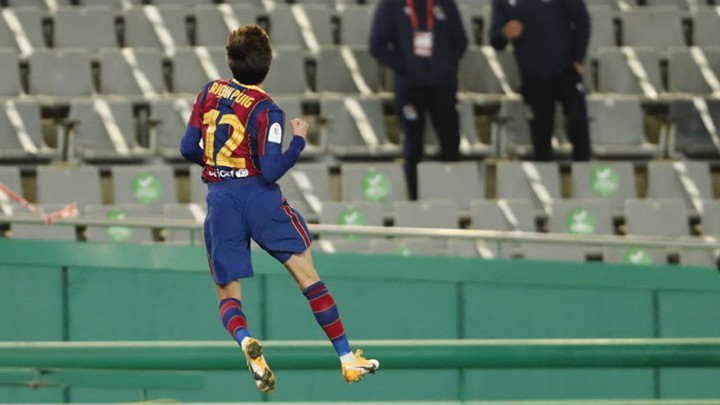 Ronald Koeman had four of his five penalty takers written down for Barcelona's penalty shootout against Real Sociedad in the Supercopa de Espana semi-final on Wednesday night, but then Riqui Puig raised his voice and said that he'd take one.

The 21-year-old stepped to take the fifth and final penalty, with the score level at 2-2, and he slotted it into the bottom right corner to send Barcelona into the final, a moment he hopes to build on.

"Ronald had four names written down and he asked who wanted to take the fifth," Puig told Movistar. "I was the first one to put my hand up."

However, the midfielder almost didn't get a chance to become the hero.

"If Antoine [Griezmann] had scored, we would have won earlier," Puig recognised.

"I'm very happy for the goal, for going through to the final and above all for the team, we deserved it."

Puig is clear that he is going to keep working hard in order to try and become a regular in the Barcelona first team.

"Even though I don't play much, things are going well: I have my family, my health. I can't complain about anything

"If Ronald gives me minutes I will be grateful and I will take advantage of it, and if not I will keep working.

"Throwing in the towel? I'd never do that. After so many years at the club, and the journey of reaching the first team, I am never going to throw in the towel."