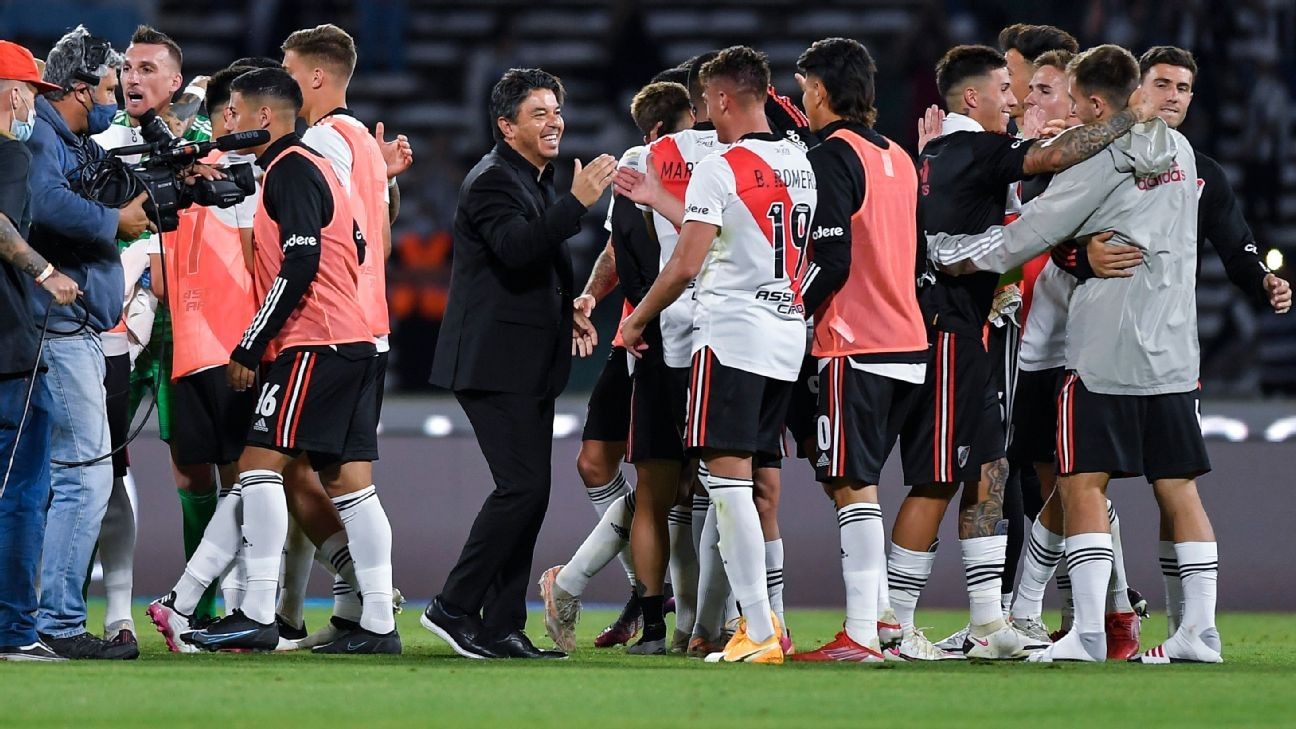 He has been there since 2014, but it seems likely that Marcelo Gallardo's reign as coach of Argentina's River Plate is now in its final few weeks. It is truly remarkable that he has been there for so long. These days it is hard to find seven-year spells anywhere in football, but especially in the turbulence of South America, where the best players are constantly leaving and cycles are usually short.

It is this capacity to deal with change that makes Gallardo so impressive and such an interesting character to follow. He has repeatedly had to rethink and rebuild his side. At just 43, the best is still to come, and Europe will surely be the next stop. He has a name as a player -- a fine attacking midfielder with over 40 caps for Argentina, three spells at River and club European experience at Monaco and Paris Saint-Germain - and his work as a manager has been praised by Pep Guardiola. Indeed, it is not inconceivable that he might even be a candidate to be the next coach of Barcelona -- a job where his ability to deal with turbulence would be especially useful currently.

Fans returning for River Plate vs. Boca Juniors a big boost for Argentina20dTim VickeryNeymar, Messi close in on what could be their last World Cup11dTim VickeryTabarez's 15-year reign in Uruguay may be nearing its end4dTim Vickery

For the next few weeks, though, there is unfinished business. Gallardo has taken River to two triumphs in the Copa Libertadores, South America's Champions League -- in 2015 against UNAL and the epic win over local rivals Boca Juniors in 2018.

Since then there have been frustrations: He was a few minutes away from retaining the Copa title in 2019 until his defence collapsed right at the end against Flamengo; last year his side were unlucky to fall to eventual champions Palmeiras in the semifinals. But this year they were easily eliminated in the quarterfinals by Atletico Mineiro.

Year after year it is becoming harder to compete with the wealth of the Brazilian clubs -- which is one explanation for the speculation that he is ready to stand down. But if he does go at the end of the year, he will want to leave River with a league championship to his name.

Extraordinarily, it is the missing title from his collection. Gallardo won the league with River six times as a player. As a coach he has won the domestic cup three times, and followed it up with two wins in the Super Cup -- the clash between the league and cup champions -- but the league title has always eluded him. It mattered less while River had their sights set on the Libertadores, they could always claim they had bigger fish to fry, but now it takes on extra importance. Suffering defeat to the Brazilians at continental level makes it more important that River end the Gallardo era as kings of their own hill. And it is looking very likely.

River lead the league table and on Thursday night they visited second place Talleres in the city of Cordoba four points ahead of Talleres and six clear of third-placed Boca. Defeat would have cut that lead to just one point.

River have been suffering from injuries and were forced to field an inexperienced side, full of the youth products that Gallardo loves to develop. The atmosphere in the stadium -- after a year-and-a-half away, fans returned to Argentine stadiums this month -- proved too much for one of those youngsters. After just seven minutes defender Felipe Pena Biafore lunged into a dreadful two footed tackle and was sent off. Against the second best team in the tournament, River were forced to play almost the entire match with 10 men.

Gallardo considered how best to reorganise. One nickname, "Muneso" (doll), refers to his baby-faced appearance; the other, "Napoleon," speaks of his skill as a strategist. Until half-time veteran midfielder Enzo Perez dropped into central defence -- a stretch, but not nearly as big as the game a few months back when the team was suffering from a COVID-19 outbreak and Perez was forced to play in goal.

River went with a 4-4-1, leaving up front the bright and talented Julian Alvarez, potentially the most outstanding of all the discoveries Gallardo has made over the last seven years. Alvarez worried the Talleres defence and shortly before half-time River took the lead. A shrewdly taken free kick was played right to winger Santiago Simon, and his low cross was turned in by Paraguayan defender Robert Rojas.

At half-time, big centre-back Jonathan Maidana was brought on to deal with the inevitable aerial assault that Talleres would launch. And Gallardo also realised that the system would make huge demands on his widemen, who would have to work up and back, supporting Alvarez and helping out the defence. They, too, were switched, with Braian Romero coming on to attack down the right and he clinched the game with 20 minutes to go. Alvarez was slipped through on the counter attack, burst past his defender and squared intelligently for Romero, who beat the keeper with a cool finish.

River Plate, then, finished the night seven points clear at the top if the table -- and there are just eight rounds to go. The title is theirs to lose, and Gallardo seems to be just a few games away from going out on a high.