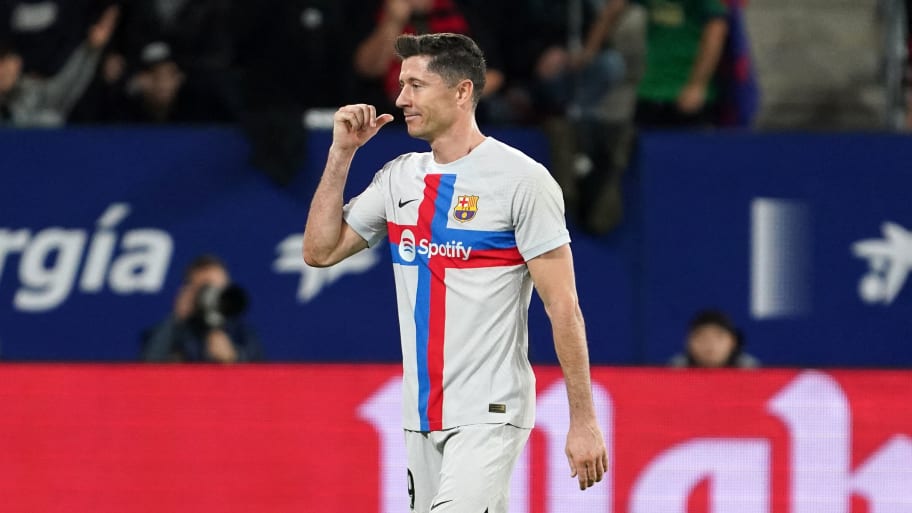 Robert Lewandowski was given his marching orders just over half an hour into Barcelona's game away at Osasuna on Tuesday night, a second yellow card brandished by referee Gil Manzano after the Polish striker appeared to back into and elbow defender David Garcia.

Garcia also opened the scoring for Osasuna from a corner in the sixth minute, but despite their numerical disadvantage, Xavi's side fought back and ultimately won after second-half goals from Pedri and Raphinha.

That's the good news, but the bad news for the Catalan club is that Lewandowski could now miss further important games against Atletico Madrid and Real Betis along with their upcoming derby against cross-city rivals Espanyol after the World Cup.

Lewandowski left the field expressing his disapproval of the decision and making a gesture with his fingers and nose, which reports have claimed was a message that there was something 'fishy' about the referee. The Pole was even seen pointing at the referee as he left the pitch.

Should the disciplinary committee find Lewandowski guilty of questioning the integrity of the official, then he would face more than the typical one-game suspension that comes with two yellow cards and could be out for a further three games.

Former Atleti and Borussia Monchengladbach defender Alvaro Dominguez did attempt to help clarify the matter by explaining that the gesture simply meant 'arrogant' in Germany, where Lewandowski played for 12 seasons with Borussia Dortmund and Bayern Munich. Whether that will help the forward escape further suspension remains to be seen.

He wasn't the only Barcelona player to express their disdain at the referee, either, as retiring defender Gerard Pique also managed to get sent off in his final game after a half-time tirade to Manzano about some of the refereeing decisions despite not even playing.

According to reports, Pique said something along the lines of "Did you see the corner you gave? You're the referee who's screwed us over the most, by a long way", which prompted an abrupt end to his final game for the club.

This article was originally published on 90min as Robert Lewandowski facing lengthy ban over controversial gesture against Osasuna.