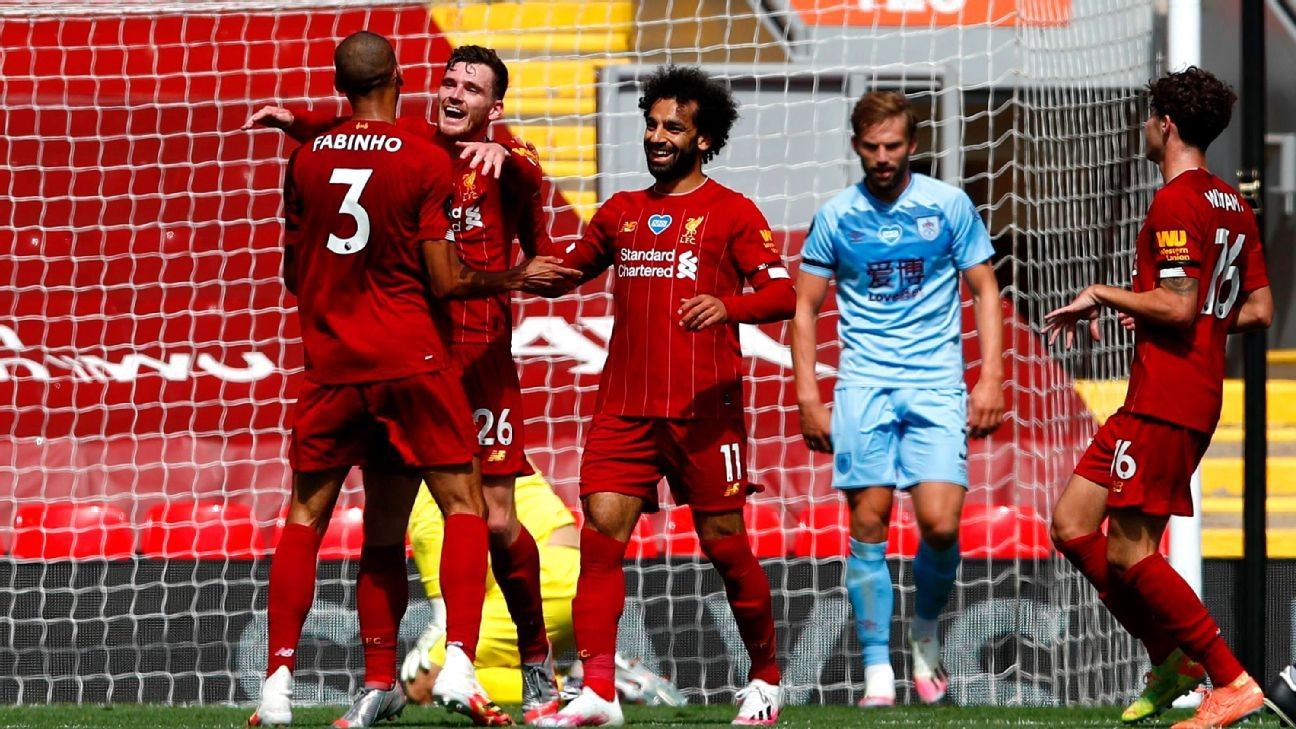 Premier League champions Liverpool failed to win a league game at home for the first time this season, as they were held to a 1-1 draw by the resolute Burnley.

Clarets goalkeeper Nick Pope was the thorn in Liverpool's side, producing some superb saves to deny the likes of Mohamed Salah and Sadio Mane.

- Stream ESPN FC Daily on ESPN+ (U.S. only)
- How many records can Liverpool still break?

Andy Robertson scored the opening goal with an exquisite header, though Burnley got themselves back into the game with a good second-half strike from Jay Rodriguez.

While this game will have no bearing on their league position, Jurgen Klopp will be frustrated that his side failed to take all three points as they chase down a Premier League record total.

Liverpool really do move the ball brilliantly, which allowed them to pull Burnley out of position and open up spaces for themselves. They also looked convincing in most of their defending before the Burnley goal, with the visitors failing to create too many chances.

Sometimes Liverpool's passes in the final third were over-hit or misplaced, with Burnley filling in to make things tough for them. They were fairly wasteful in front of goal, even if they were denied by brilliant saves from Pope at times. Burnley's equaliser was punishment for this. It will be frustrating that they were undone by a set piece after being so dominant in open play.

7 -- Klopp has a challenge on his hands ensuring Liverpool are on top form in every game now that they are confirmed as champions. The German coach used youth products Neco Williams and Curtis Jones, who both gave good accounts of themselves, but he just couldn't push his team on to victory.

GK Alisson Becker, 6 -- There wasn't too much the Brazil international could do about Rodriguez's goal, and he didn't have that much else to do throughout the game.

DF Neco Williams, 7 -- Back on his preferred right side, Williams showed why he is so highly regarded. The 19-year-old's quality was there for all to see, though there were a few moments of naivety defensively.

DF Joe Gomez, 6 -- Solid for large periods, but there were a few times that the England defender's concentration seemed to slip. He could have done better for Burnley's goal. Was booked for fouling Matej Vydra after taking a poor touch.

DF Virgil van Dijk, 7 -- The Dutchman was dominant in the majority of his play, barely putting a foot wrong. He won't have been happy with the way in which the goal was conceded.

DF Andy Robertson, 8 -- The Scotland captain's header to open the scoring was simply superb, while his dangerous deliveries into the box deserved at least one assist.

Fabinho and Andy Robertson combined brilliantly for the opening goal but Liverpool couldn't see out the win. Clive Brunskill/Getty Images

MF Fabinho, 8 -- His assist for Robertson's goal was delightful. The Brazil midfielder also swept up most of the danger in central areas and showed the overall quality of his passing.

MF Curtis Jones, 7 -- The youngster has a massive task ahead of him trying to permanently break into the Liverpool midfield, but performances like this will help his cause. He was authoritative, seeing plenty of the ball, though he was wasteful in front of goal.

FW Mohamed Salah, 6 -- He was frustrated by brilliant saves from Pope, but the Egyptian should have done much better with some of the efforts he had on goal. He will struggle to believe that he failed to hit the back of the net.

FW Roberto Firmino, 5 -- Made some smart touches, but was really wasteful in the final third. Had a great chance to get his first home league goal of the season, though he hit the post with a poorly struck effort.

FW Sadio Mane, 7 -- Like Salah, Mane found himself being denied by Pope, despite there being times when he threatened to beat the 'keeper who is still chasing the Premier League's Golden Glove award this season.

Trent Alexander-Arnold, 6 -- Replaced Williams in the 69th minute and showed plenty of trademark quality in his distribution.

Naby Keita, 4 -- Replaced Jones in the 69th minute and made some poor pass selections.