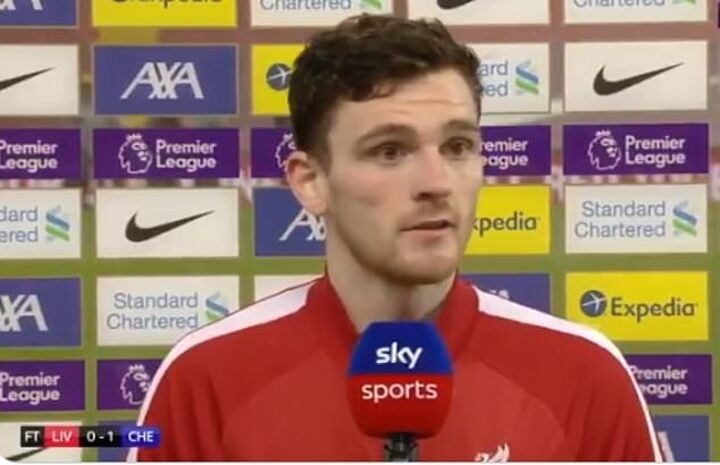 Jurgen Klopp's men conceded in the second half to a curling Mason Mount effort, after having seen an early effort from Timo Werner judged to be marginally offside.

Despite coming back into their own in the second half Liverpool could not string together the right moves to make a comeback, leaving a furious Robertson at the final whistle urging his team-mates to not 'rely on the past.'

The Scotland international spoke to Sky Sports at the end of the game, and pulled no punches as he admitted that the reigning champions simply are not good enough and are now running out of games to achieve their aim of finishing in the top four.

Robertson insists that his side must forget all about the heroics of last season in order to avoid sleepwalking to a potentially catastrophic mid-table finish.

'We can't rely on the past. Last season is over with, it is done,' said Robertson.

'We have nowhere near been good enough to what Liverpool team should be. We are dropping further and it is not good enough.

'These games are won and lost on fine margins and these goals can't happen. For us to get beaten on the counter attack is not good enough.

'Five home games without a win, that is nowhere near good enough. Nothing is going to help the fans at home and it is simply not good enough because games are running out for what we want.

'Too many heads are going down when we go 1-0 down, we cant do that. Football is about taking knocks.