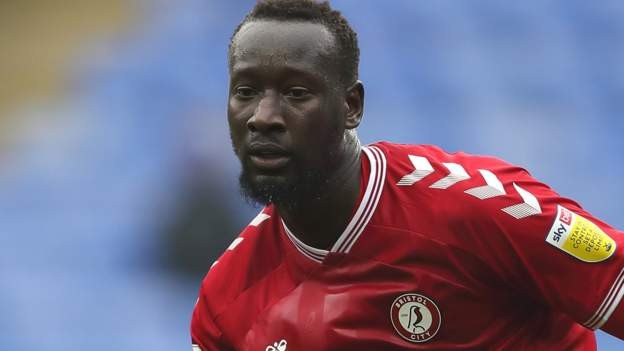 Bristol City chief executive Mark Ashton says he will not let anyone "hold the club to ransom" in contract or transfer negotiations.

Striker Famara Diedhiou, who the Robins paid £5.3m for in June 2017, is among the players at Ashton Gate out of contract in the summer.

"We have a sensible structure and we have made Famara a very big offer to stay," Ashton told BBC Radio Bristol.

"I hope he takes that. But you can't sign any player at any cost."

Senegal forward Diedhiou has scored six goals in 26 outings for the Championship club this season, and has netted a total of 47 times since his move to City.

"We have been in dialogue with Famara and his representatives - and there are a number of them - for many, many months now," Ashton, taking to the Sound of the City programme on Monday, added.

"I was key to bringing Famara here and I would love nothing more than for him to stay - but not at any cost.

"We will keep the lines of communication open and endeavour to do our best with it."

Ashton says the coronavirus pandemic and its impact on the club's finances is having a knock-on effect on their approach to renewing the deals of out-of-contract players.

"Part of the challenge you have got is the timing of re-engagement," he said. "All clubs have been without revenue for almost 10 months.

"Players' salaries, on the whole, are coming down and there is a potential salary cap on the horizon.

"We still don't know when fans are coming back. How do you buy something when you don't know what your income is going to be?

"There are a number of players we want to re-engage. We are in continual discussion with them."

Despite the financial issues, Ashton has reassured Robins fans that owner Steve Lansdown remains fully committed to the club.

"Steve said at the start of Covid that all clubs are going to struggle," said Ashton. "You have Championship clubs who have got themselves into trouble.

"You have clubs not paying wages, big clubs who can't get out of League One and clubs who have gone into administration.

"You have none of those shenanigans with Bristol. That is primarily because Steve stands behind the club with the Lansdown family.

"All the non-matchday revenue has gone. It has hurt right across the board.

"The Lansdown family genuinely care for this football club. They fund it properly and we try to run it properly."