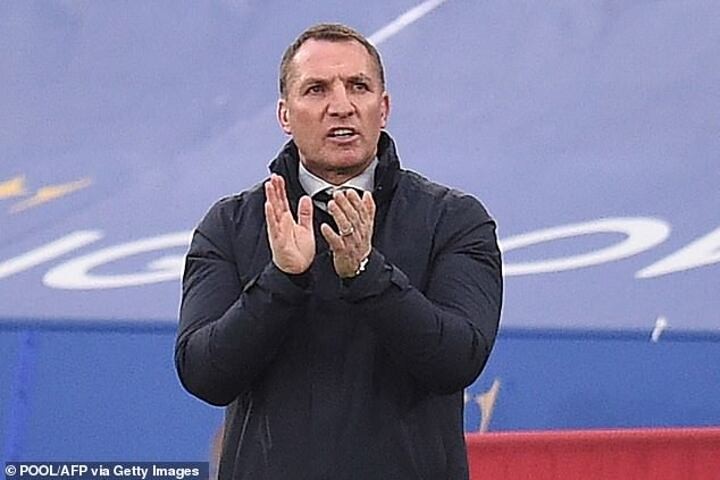 Brendan Rodgers has expressed sympathy with Ole Gunnar Solskjaer as Manchester United prepare to take on Leicester on Tuesday in their second game in barely 48 hours.

Solskjaer has complained bitterly that United play three times in five days and could make huge changes to his starting XI for a fixture that is vital for Leicester’s hopes of a top-four finish.

Leicester’s surprise defeat by Newcastle last Friday put their hopes in the balance and they also face a tough end to the season. On Saturday they face Chelsea in the FA Cup Final before also meeting Thomas Tuchel’s team in the league and finishing the season with a home game against Tottenham.

‘I have empathy for Ole,’ said Rodgers. ‘It's a hell of a schedule to play last Thursday, then Sunday, Tuesday and then Liverpool on Thursday.

‘It’s tough physically for the players - no matter how big a squad you have it's a difficult turnaround.’

Rodgers will rely heavily on his senior players to ensure Leicester keep their calm as fans worry about a repeat of last season.

The Foxes poor form after the spring lockdown saw them drop to fifth on the final day of the season after spending the entire campaign in the top four.

But they were helped by West Ham’s home defeat by Everton on Sunday and will move eight points clear of the fifth-placed Hammers if they can win at Old Trafford. Former United defender Jonny Evans is a doubt after aggravating a heel problem in the warm-up prior to the Newcastle defeat.

Rodgers added: ‘Players like Kasper Schmeichel, Jamie Vardy and Jonny are very experienced. When you are challenging at the top end of the table or for trophies, the concentration level has to increase.

‘That’s the hard part this season. If you go loose then you are punished, which is what happened to us on Friday. Our concentration was nowhere near good enough in certain aspects of our defending.

‘We are very close to achieving what we want but we know we have to fight and we have made it difficult for ourselves, that's the reality. Against Newcastle and Southampton we didn’t get the results we wanted.

‘That means we have to push and look to win our remaining games, starting tonight.’