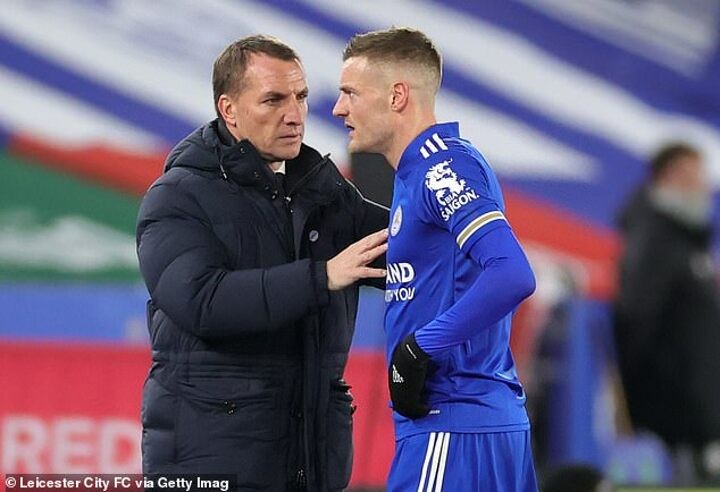 Leicester manager Brendan Rodgers 'hopes' that Jamie Vardy will be fit to start against Chelsea on Tuesday night after the striker's sore hip flared up during Saturday's victory over Southampton.

The Foxes moved up to second in the Premier League with a hard-fought 2-0 win over the Saints, James Maddison and Harvey Barnes scoring either side of half-time.

Vardy, who has had an ongoing issue with his hip, looked to be feeling some discomfort in the latter stages of the game and was substituted in the first minute of injury time.

It was a worry for Leicester fans with their side hosting top four rivals Chelsea in the week but Rodgers remains optimistic about the 34-year-old's chances of playing.

'We hope so,' he told Leicestershire Live. 'It was obviously sore and restrictive for him, so we thought we would take him off towards the end and give him some sort of breather. It was that impingement he gets on his hip.'

Reflecting on Saturday's important win, Rodgers continued: 'It was always going to be a really hard-fought game. Southampton are a very good team, they've got great players, they work very hard.

'We were too passive in the first 25 minutes. We weren't running hard enough, we weren't getting to second balls, we weren't aggressive enough.

'We started to find our way into the game. We spoke about doing the dirty side much better because that allows you to sustain your attacks more.

'Youri plays a great pass and James does what he does best, with some lovely body work and then finishing really well.

'Not every game is about nice football. You've got to earn the right in the Premier League. This is a league you've got to fight like hell for every result.

'Second half we were much better at that. We were aggressive, we created lots of opportunities, and worked tirelessly. Overall, a very good win, we could have had more goals but it's a great three points.'