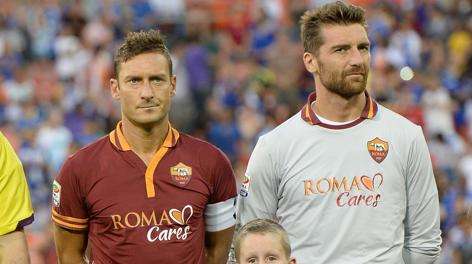 Roma icon Francesco Totti should renew his contract with the club for another year, goalkeeper Morgan De Sanctis has urged.

The striker is going through one of the most uncertain patches of his career but continues to have the unwavering support of the majority of Roma supporters, who regularly give him standing ovations off the bench, and now De Sanctis has given his support for a renewal.

“The renewal of Totti would be the best possible solution for Roma,” he told VoceGiallorossa.

Totti turns 40 in September but has showed no signs of hanging up his boots just yet, and is apparently ready to consider other destinations should Roma choose to let him go in the summer.

New York Cosmos in the United States had been touted as a potential destination, but they withdrew their interest late last week.

Retired Italy international Totti has made just two starts for the Giallorossi this season, and six appearances overall.