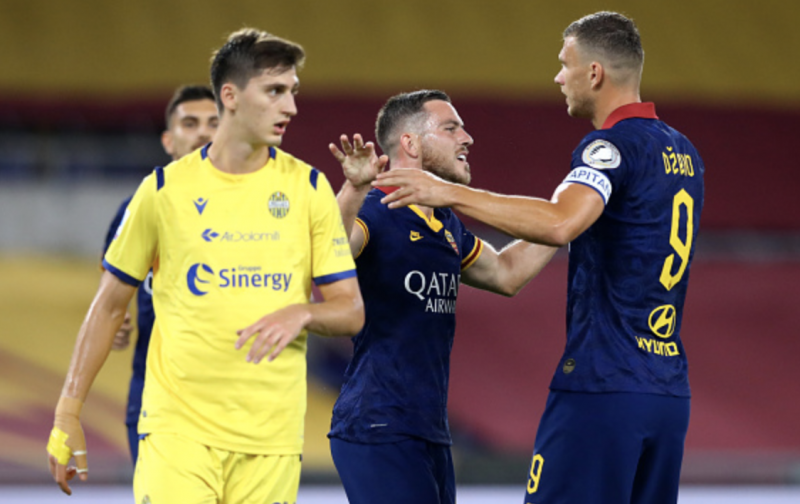 A Jordan Veretout penalty and Edin Dzeko header were enough to send Roma four points clear in fifth place with a 2-1 win over Hellas Verona in Rome on Wednesday.

The midfielder’s spot kick opened the scoring early on after vociferous protests from the visitors at the penalty decision, and Dzeko nodded in his 15th Serie A goal of the campaign in the dying seconds of the first half.

Matteo Pessina pulled one back after the break, before Roma wasted several good chances to restore a two-goal advantage.

But the Giallorossi held on for their third consecutive Serie A victory, lifting them four points above Napoli and AC Milan, while Verona’s faint hopes of European qualification now look to be over as they sit in ninth place, nine points away from the top six. Roma took the lead after nine minutes through a coolly dispatched Veretout penalty, after Lorenzo Pellegrini was deemed to have been tripped in the box by Alan Empereur.

The decision to award the spot kick infuriated the visitors, as Empereur appeared to get a clean touch on the ball, and Gialloblu coach Ivan Juric was sent off for his protests.

Verona’s fury only grew when appeals for a Dzeko handball inside the area were waved away, and moments later Roma stormed up the other end and Henrikh Mkhitaryan lashed a shot off the post. Dzeko doubled the hosts’ lead in first half stoppage time when he leapt to meet Leonardo Spinazzola’s cross with a powerful header.

But Hellas mustered an instant response after the break when Pessina back-heeled a neat finish in from close range after some great work by Mattia Zaccagni down the left to set him up. Roma squandered two big chances to extend their lead, firstly when Dzeko blasted over from 12 yards and then when Darko Lazovic pulled off a superb goal-line clearance to stop Mkhitaryan’s shot from reaching an unguarded net, with goalkeeper Marco Silvestri stranded.

Dzeko had another glorious chance to wrap up the three points when he was left one-on-one with the goalkeeper, but he blasted his finish over the bar.