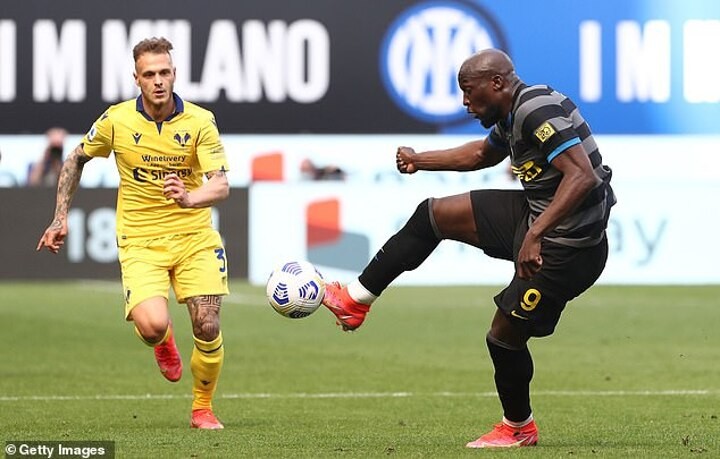 Inter Milan striker Romelu Lukaku has emphatically shut a fan down on social media who criticised his poor control while he played for Manchester United.

Lukaku is enjoying a new lease of life at Inter following his £73million move from Manchester United, and played a starring role last season by scoring 24 goals in 36 matches as the club claimed their first Serie A title since 2010.

He has put his tough spell at Old Trafford firmly behind him now, but one fan on Thursday decided to criticise Lukaku for his sloppy displays in a United shirt during a Twitter Q&A with the striker.

The fan, who works for FIFA Ultimate Team, questioned: 'How come you couldn't even control the ball at United but turned up at Inter? I mean you could not contain simple passes made to you.'

Lukaku immediately took aim, explicitly replying: 'I wouldn’t play at this level if I couldn’t control a ball the f***.'

Lukaku arrived at Old Trafford in 2017 from Everton in a £75m deal and there were big expectations on his shoulders to deliver at one of the top clubs in football.

However, he struggled to live up to the pressure and would occasionally come in for criticism for sub-par and sloppy performances while leading the line for United.

After failing to convince at United, Lukaku left Old Trafford with 42 goals and 13 assists in 96 matches.

But he has since hit new heights at the San Siro with Inter and emerged as one of the best centre-forwards in European football thanks to his pace, eye for goal and ability to link up play in attack.

Lukaku, currently shining for Belgium at the Euros, has already netted a brilliant 64 times and produced 16 assists in just 95 matches for the Serie A giants since 2019.

The 28-year-old's imperious form led to interest from former club Chelsea and Manchester City this summer, but Lukaku knocked them both back earlier this month by claiming he wants to stay at Inter.

'Yes, I am staying,' he told Dutch broadcaster VTM when quizzed on his future at the beginning of June.

He also added: 'There's also the challenge of doing it again [winning the league with Inter]. I feel good at Inter.'