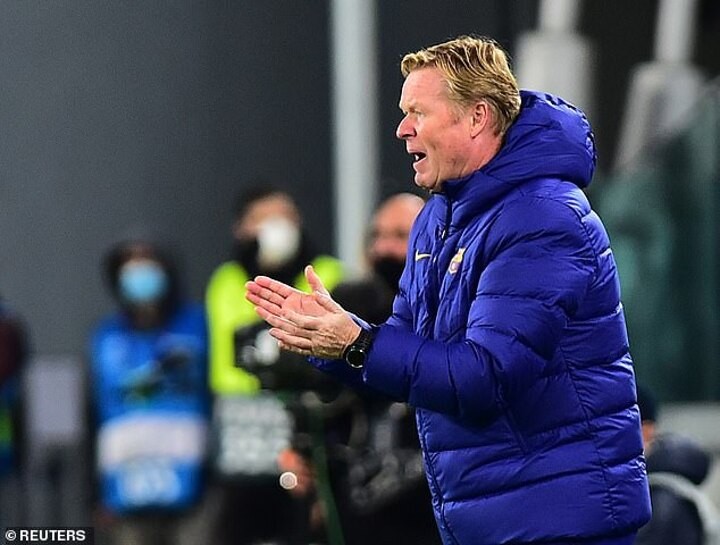 There were two scorelines that stood out from Barcelona's victory over Juventus in midweek: the 2-0 that mattered most, and the 59.3 per cent to 40.7 per cent possession statistic that also jumped off the page of Uefa's post-match information sheets.

Ronald Koeman's side had finished the game with almost 20 per cent more of the ball than Juventus and that felt like a throwback to their habitual domination under Pep Guardiola more than a decade ago.

They had done it in Italy too, against the Serie A champions and they had done it with kids. So from the winter of discontent comes, not quite glorious summer, but springtime at least.

Barcelona supporters, down in the mouth last weekend after a Clasico defeat and still bemoaning their president's refusal to stand-down, had been lifted, not only, by the resignation of Josep Bartomeu but by watching a side built on the talents of two 17-year-olds win in Turin.

On Saturday they will celebrate Ansu Fati's 18th birthday with plenty of optimism for the way this season is likely to pan-out. With Fati starring alongside still 17-year-old Pedri they believe the best young talent in football is theirs and that in Ronald Koeman they have the right man to guide the youngest squad in La Liga.

Bartomeu's last big decision it seems was actually a well-taken one – they have the right coach to get the best out of all the potential.

Much has been made of how the departure of Bartomeu will allow the club to hold elections at the start of January and have a new board installed while the transfer market is still open.

But the cold reality is that the club's financial situation is not going to change just because a new man is in charge and the unlikelihood that anything drastic will happen at the start of next year in terms of new arrivals leaves the onus on Koeman.

It has always been one of his strengths. It's well documented that in his brief stormy spell at Valencia he upset the likes of David Abelda, Santi Canizares and Joaquin but at the same time he was bringing through players such as Juan Mata and Ever Banega.

The early development of Zlatan Ibrahimovic had a lot to do with the way Koeman showed great faith in him no sooner had Ajax signed him from Malmo as a 19-year-old. He also trusted Wesley Sneijder and Rafael van der Vaart in that time and subsequently Frenkie de Jong as Holland coach.

It's not a rule without exceptions – Gerard Deulofeu has little time for him after their spell together at Everton – but it does seem Koeman thrives when he has the chance to mould young players and the financial situation at Barcelona makes that an important quality in the club's manager.

Fati's talent has been clear for sometime. The instant chemistry with Lionel Messi bode well from the beginning too. La Liga's joint top scorer has already been fast-tracked to the Spain team and currently looks first choice for club and country.

But Pedri is a surprise. There was certain scepticism over the rave reviews he earned last year out on loan at Las Palmas. It was the second tier after-all and physically, at least, he turned up to pre-season in the summer still with the appearance of youth team player.

But Koeman did not take long to come to the conclusion that this was not a player the club should be loaning out. Pedri played a big part in the handful of pre-season friendlies that were squeezed into the calendar before the season began and he was soon in the first XI.

He had an underwhelming Clasico debut playing on the right of the line of three behind the centre-forward but Koeman did not bow to pressure to put the youngster back on the bench.

The next game he started, in the Juventus Stadium no less, this time playing on the left and finishing with 39 out of 41 pass-accuracy rate. He was arguably Barcelona's best player and he looks here to stay.

With Coutinho out for another three weeks Pedri finds himself and a group of five players contesting four first team berths. He played to the left of Messi in midweek with Griezmann as false nine and Ousmane Dembele on the right wing.

Fati came on and won the penalty for the second goal and should start this weekend against Alaves but Pedri is firmly in the mix now to remain in the side under Koeman.

Barcelona's interim president Carles Tusquets is likely to announce next week what findings have been made going through the accounts of the recently departed board.

The candidates to take over long-term from Bartomeu will also begin to outline their plans. But it may be that for now at least no one makes too many noises about replacing Koeman.

Aside from being a club legend, he may just be their best chance of them taking something positive from this season when youth has to carry the club forward. In Pedri and Fati the club's supporters believe he has the tools to do so.