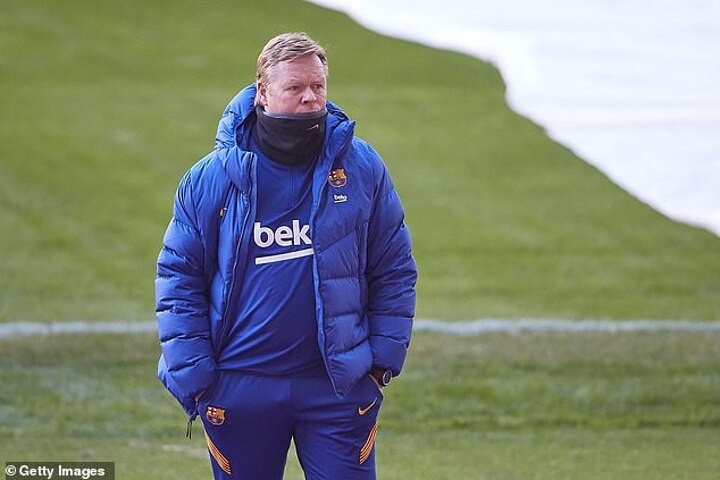 Barcelona manager Ronald Koeman is to eager to sign players in the January transfer window but worries the club are not in the right 'economic situation' to do so.

Koeman claims the current Barca side are 'lacking people' and insists the club must 'want more' and 'sign more' to overcome their slow start to the season.

Barca are currently sitting fourth in the LaLiga table, 10 points behind leaders Atletico Madrid and six points off their rivals, Real Madrid.

However, Koeman does not believe it is enough to restore the club to its former glory and challenge for the LaLiga title.

Speaking of the January transfer window, Koeman said: 'My position is known: we lack people, but the economic situation of the club is an influence.

'I think we all think the same. If no one arrives, I accept it and we continue the same, but if we want more we must sign.'

As a result, Barca have had to limit their spending and make cuts to their first team squad in a bid to reduce the wage bill.

Koeman thought he had secured the signing of central defender Eric Garcia from Manchester City – before finding out that the club's board had blocked the deal.

Presidential candidate Joan Laporta said the board were reluctant to fund the transfer when Garcia will be available on a free transfer in the summer.

'We cannot demand that the Management Board make decisions like this,' Koeman said after the transfer was blocked.

'We have concluded that if he is a player whose contract is ending, we must wait.

'If we moved now we would have to pay the transfer fee plus the player's salary.'

As a result, Koeman said he will 'demand' more from his existing players but insists his criticism will come with 'respect' as he wants 'to help them'.

He said: 'I am not going to lie. I say what I see. If you are a Barca player, you have to be demanding.

'I criticise them with respect. I'm not going for anyone, I want to help them, but if we play against Cornella with all due respect and we are not able to win in 90 minutes, I have to say what I see.

'If not, bring in another coach.'