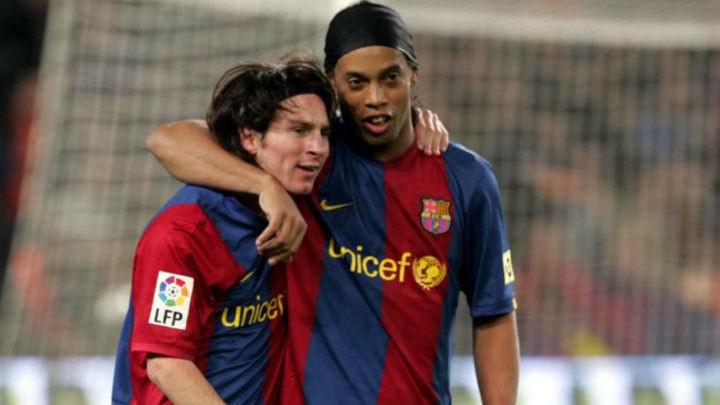 Ronaldinho is still revered by many Barcelona fans at the Camp Nou, but his departure from the club allowed Lionel Messi to flourish and establish himself as the Blaugrana's new star.

The Brazilian famously took the Argentine under his wing once Messi first came into the Barcelona first team, and it is clear that Ronaldinho still has a lot of admiration for Messi.

"When I arrived at Barcelona, there was already talk of a kid who stood out," Ronaldinho told the Panenka magazine.

"Then we were friends; we started playing together and we got on very well.

"He arrived being different to all the others, and we spoke with [Frank] Rijkaard so that he came to train with us - it was all very fast.

"I was lucky enough to give him the pass for his first goal.

"Over time, it's very nice to see someone who starts out so close [to you] and then conquers the world.

"We were always very close. We learned things, he taught me Spanish and I taught him Portuguese, but with the ball we understood each other perfectly.

"I'd be left amazed by how calm he is. That's something I love about him; he never gets into trouble, he's always with his family and those closest to him.

"Leo has everything, he didn't need anything from me."

Overall, Ronaldinho only has positive thoughts when he looks back at his time at Barcelona.

"From the first game, it was all a joy," he stated.

"There are a lot of memories.

"I think I arrived with thousands of people waiting for me in the stadium."

It was under Rijkaard where Ronaldinho thrived in a Barcelona shirt, with the coach and star player regularly being on the same page.

"He's a great coach, a very quiet guy, the best I've ever worked with," Ronaldinho said.

"He knew everything because he played at the highest level, and that made things easy for us.

"Everything he asked us to do, he has already done it before, so he spoke to us in a very simple and direct way.

"He gave me a lot of freedom to play my football.

"When we didn't have the ball, we also had to fulfil our obligations.

"But when we had it, he made me feel completely free."