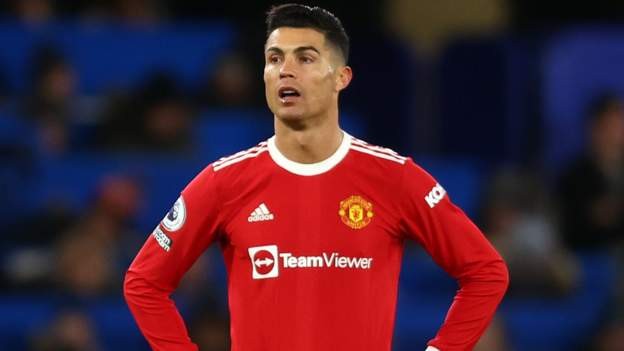 Cristiano Ronaldo has accused the France Football editor of lying after he said the Portuguese's only ambition was to retire with more Ballons d'Or than Lionel Messi.

Ballon d'Or organiser Pascal Ferre made the claim to the New York Timesexternal-link.

"I always win for myself and for the clubs I represent," said Manchester United forward Ronaldo.

"I win for myself and for those who love me. I don't win against someone."

On Friday, Ferre told the New York Times: "Ronaldo has only one ambition, and that is to retire with more Ballons d'Or than Messi - and I know that because he has told me."

Ronaldo responded on social mediaexternal-link, saying: "Pascal Ferre lied, he used my name to promote himself and to promote the publication he works for.

"It is unacceptable that the person responsible for awarding such a prestigious prize could lie in this way, in absolute disrespect for someone who has always respected France Football and the Ballon d'Or.

"The biggest ambition of my career is to win national and international titles for the clubs I represent and for the national team in my country.

"The biggest ambition of my career is to leave my name written in golden letters in the history of world football."

The Ballon d'Or - awarded to the best footballer of the year - is voted for by 180 journalists worldwide and presented by France Football.

Ronaldo, who last won the award in 2017, finished outside the top five for the first time since 2010.

Either Messi or Ronaldo has collected the award every year from 2008 to 2019, apart from in 2018 when Croatia midfielder Luka Modric won.

Is there an ideal post-Covid diet? Find out how what you eat can help aid recoveryWhen Ruby Wax met Donald Trump: She reflects on a tense and uncomfortable encounter with the former president