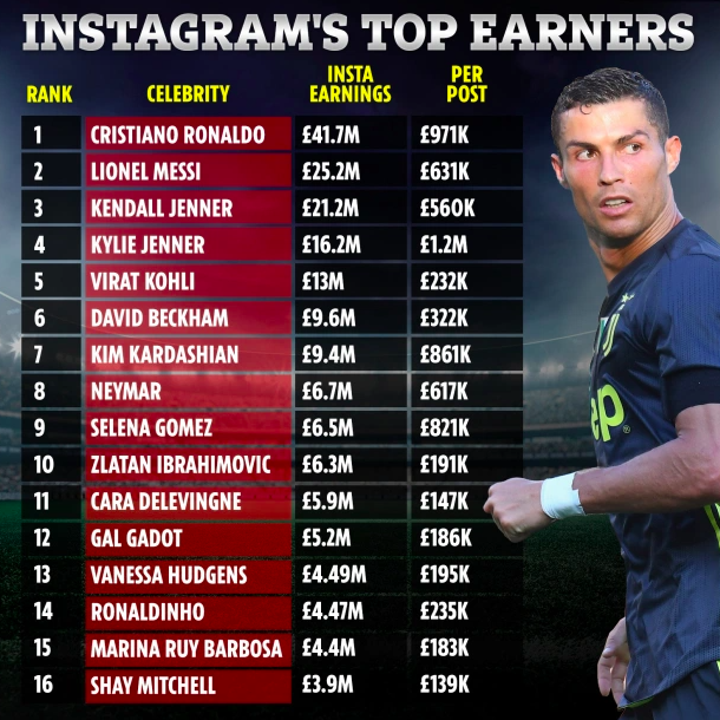 Ronaldo is Instagram's top earner after raking in £14million MORE from his posts than he does playing for Juventus. According to a new report from Buzz Bingo, the Portuguese superstar has retained his crown as the social media site's highest earner.

In comparison, Ronaldo was making £27.3m from his salary at Juventus, before any coronavirus-related pay cuts.

The five-time Ballon d'Or winner saw an increase of £3.5m from his Instagram earnings in 2019 by pocketing an average of £971,000 per sponsored post.

Over the past year he promoted Nike, his fragrance CR7 Play it Cool and even an EMS training device called 'Sixpad'.

Ronaldo's longstanding rival Lionel Messi was beaten into the second spot after his sponsored posts collected a total of £25.2m, or £631,000 every time he made one.

The Barcelona captain has money-making partnerships with Adidas and regularly posts pictures of his globe-trotting lifestyle.

David Beckham was once again the highest-paid British star on the rich list for his posts to his 63m followers.

The 45-year-old is such a hit on the social media platform he scooped a whopping £9.6m despite retiring over seven years ago.

In a list dominated by athletes, Neymar is the fifth-highest sportsman after netting £6.7m from the social media site this year with a reported average of £617,000 per paid post.

Interestingly Bayern Munich striker Robert Lewandowski has the second most sponsored posts of all celebrities at 47, four above Ronaldo.

Yet the Poland international's lack of off-field exposure means he can only fetch around £76k per post and made just £3.58m for his troubles this year.

And despite being considered one of football's most marketable stars, Manchester United star Paul Pogba is ninth on Instagram's highest-earning athletes.

The £400k-a-week Belgian captain made £1.4m this year following his £122k fee for advertising to fans on social media.