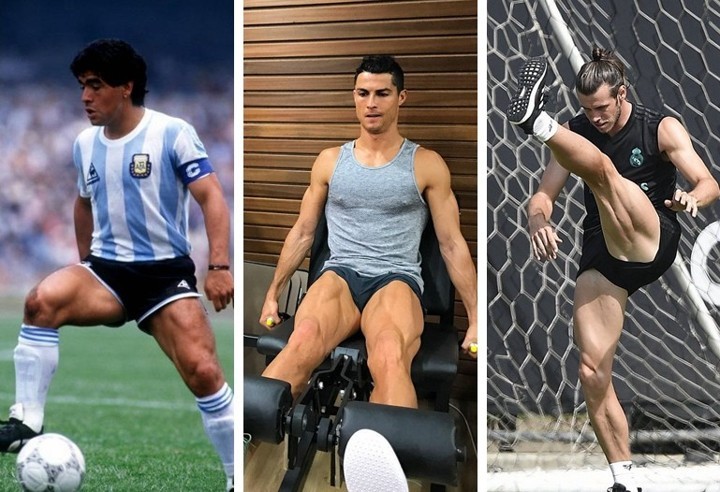 Perhaps the most tiresome and boring part of working in the gym for many is 'leg day'.

Waking up the following day and barely being able to put a step together can be a hindrance, so a number of footballers and everyday people often come up with novel excuses to avoid doing it altogether.

However, there are some who ensure that when leg day does come around, they are ready to tackle it head-on. After all, it is their feet that do the talking on the pitch.

With that in mind, we've come up with ten footballers past and present who've relished doing those squats on a weekly basis.

It is impossible to not love Clarence Seedorf.

Not only does he have one of the coolest names in football history, but he was also a legendary player during his heyday, as shown by the fact that he has four Champions League medals collecting dust in his house somewhere. And most importantly, he's got ridiculously large thighs. Just look at them!

Roberto Carlos wasn't the biggest player around but even he has a claim to having larger thighs than Seedorf.

The two actually shared a dressing room briefly at Real Madrid in the late 1990s, which is surely where their mutual love of doing leg curls started.

Considering how big his thighs were, it is hardly a surprise that Carlos could smash the ball harder than anyone else on the planet.

With both Carlos and Seedorf now retired, Cristiano Ronaldo is the man carrying the flag for gym-loving footballers.

Rarely does a day pass when the Portuguese superstar isn't uploading a picture of himself on Instagram going through his routines in his gym.

To be fair, though, his body transformation from scrawny Man United teenager to his current superhero-esque build is pretty impressive.

So far we've predominantly focused on players with bulging thighs, but when it comes to the King of the Calves there can only be one.

To some, he goes by monikers such as the Cube of Power, the Magic Dwarf and the Alpine Messi. You might know him better as Xherdan Shaqiri.

Despite standing at 5'7, the Liverpool attacker is built like a proverbial brick s***house and, frankly, looking at the size of his legs is enough to leave us scared and impressed in equal measure.

Wilfried Bony was one of the deadliest strikers in the Premier League while at Swansea but a non-spell at Man City led to him joining Stoke City and Swansea City once more, before spells with Qatari club Al-Arabi and Al-Ittihad in Saudi Arabia.

Over the years, though, it seems as though big Wilf has done serious work in the gym by smashing out those leg presses like there's no tomorrow.

To be fair, this entry probably did skip a leg day or two.

Diego Maradona was never one for discipline.

Maradona was about more than outrageous skill, though. As perhaps the most naturally talented player in the history of the game, at times it was impossible to get the ball off him as he slalomed his way past bamboozled defenders.

But he was also extremely tough, and the strength in his legs allowed him to ride the crudest of challenges. His leap for the Hand of God was pretty handy too.

Cristiano Ronaldo and Gareth Bale supposedly didn't always see eye to eye in Madrid, and perhaps this boiled down to competition in the gym.

Bale suffered numerous injury problems as a youngster and noticeably packed on muscle during his latter seasons at Tottenham Hotspur, but he has taken his bodybuilding to a whole new level in Spain.

The Brazilian forward has made a career based off the fact he can hit the ball insanely hard and it is hardly surprising when you have a look at the size of his quads.

Although his reputation dipped after a poor World Cup in 2014, Hulk still tore apart Russian Premier League defences with Zenit and now has 70 goals in 125 games for Shanghai SIPG.

The former Germany international was known for having a rocket of a left-foot and it's easy to see why.

Judging by his thighs, it would appear that the former Bayern Munich and Arsenal forward spent a lot of time in the gym.

There you go. Pretty obscene quadricep definition if we don't say so ourselves.

Wearing your socks as low as possible seems to be a developing trend among footballers, but when you've taken the time to sculpt your legs like Jack Grealish, can you blame them?

The Aston Villa playmaker is showing us all just why he's so highly regarded this season, creating chances, turning defenders inside out and giving Gareth Southgate genuine questions regarding his international future.

The power contained within his legs is no doubt playing a part in his brilliance.