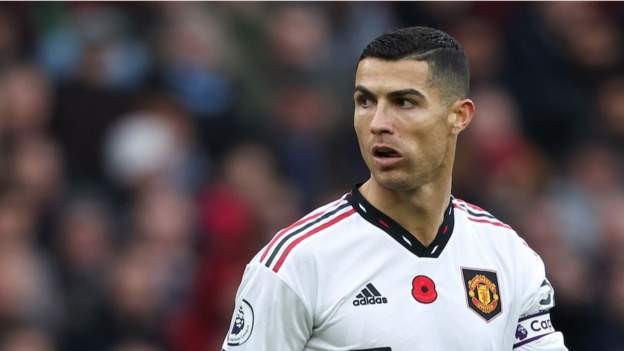 Cristiano Ronaldo says he turned down a £305m deal to join a Saudi Arabian club in the summer - a move that would have seen him become the highest-paid footballer in the world.

In an interview with TalkTV, Ronaldo said he chose to stay at Manchester United because he was "happy here".

"It's true, yes it's true," said Ronaldo when asked about the rumours.

"But what the press keep saying, the garbage that nobody wants me, which is completely wrong.

"And I was happy here to be honest, I was motivated to do a great season here. But they [the media] continue to repeat that nobody wants Cristiano. How do they not want a player who scored 32 goals last year, with a national team?"

Cristiano Ronaldo & Man Utd - what comes next for the Portugal forward?

On turning down the money, Ronaldo told host Piers Morgan: "It's hard, it's hard. But in the same way, I thought that I was very happy here; that I still capable to score goals.

"Of course, the criticism is going to exist all the time, 'ah he's 37, he's not the same'. But I want to see if some guys of my age can maintain the level that I show. Yes, in this moment, I feel very, very good. I believe that I'm going to do an amazing World Cup and I'm prepared, physically and mentally."

Ronaldo has made headlines this week following his interview with Morgan, in which he said he felt "betrayed" by United, had "no respect" for manager Erik ten Hag and is being forced out of the club.

His former team-mate at Old Trafford, Gary Neville, says United "know they have to terminate" Ronaldo's contract following the interview, but the striker has no plans to stop playing.

"But I don't know, I don't know the future. Sometimes you plan one thing for your life and as I told many times, the life is dynamic. And you never know what's going to happen."