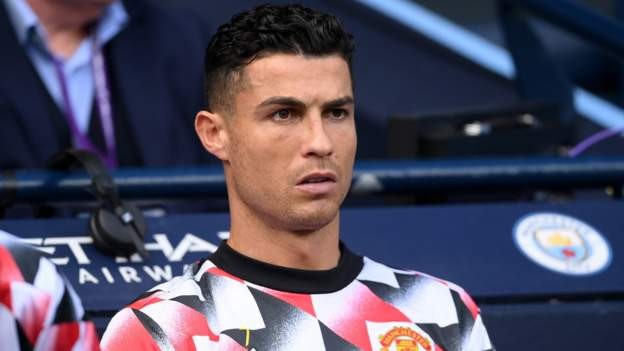 Ronaldo, 37, has started one Premier League game and two Europa League matches for United so far this season.

He was an unused substitute in Sunday's 6-3 defeat by Manchester City, with Ten Hag saying the decision was "out of respect for his big career."

"Of course, he wants to play and he's annoyed when he's not playing. It's clear."

Man Utd news and views in one place

Ten Hag added: "But when I tell you all the players, when you're here and you're happy, or satisfied, when you're on the bench, this is not a club where you have to be, and especially Cristiano.

"He's really competitive, as we all know. He's not happy of course when he's not playing.

"But I already said and, I have to repeat, he's training well, he has a good mood, he's motivated and he gives his best. That is what we expect."

Ten Hag's decision to leave Ronaldo on the bench as United was criticised with former United captain Roy Keane accusing the club of "showing disrespect" to the player.

Instead, Anthony Martial was brought on and profited by scoring two late consolation goals.

Ten Hag accepts the treatment for Ronaldo was specific.

"I think, when you're honest, you know there is a difference.

"Nobody is the same in the team, I will treat everyone with respect but they all have different backgrounds.

"I have to treat players differently to get the best out of them, but there are general standards and values that count for everyone."

Ten Hag twice said the Manchester City defeat was "a reality check" for his team and a reminder of the standards they need to reach in order to get to the levels he is demanding.

And for that, he thanks Pep Guardiola, who worked with the Dutchman at Bayern Munich.

"Now we get a reality check with Manchester City, we know we have to step up," he said.