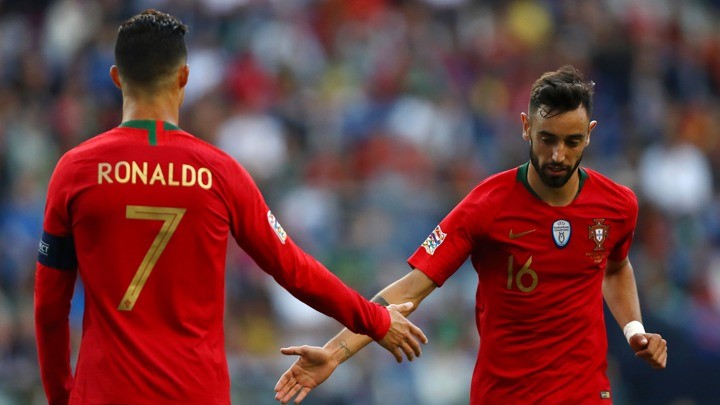 Bruno Fernandes has revealed that he started to take "more interest" in Manchester United when Cristiano Ronaldo arrived at the club, and was ultimately inspired to tread the same path as a fellow countryman over a decade later.

Ronaldo became the most expensive teenager in the history of English football when he joined United from Sporting for £12 million ($15m) ahead of the 2003-04 season, and gradually developed his game under Sir Alex Ferguson before becoming one of the world's top players.

The Portugal international helped the Red Devils win nine trophies during his six-year stay in England, including three Premier League titles and the Champions League, while earning the first of his five Ballon d'Or awards.

The 35-year-old went onto achieve even greater things at Real Madrid before joining Juventus in 2018, but he remains a legendary figure at Old Trafford and is widely regarded as one of the finest players to have ever graced the Premier League.

Fernandes followed in Ronaldo's footsteps when he left Sporting to join United in a €55 million (£48m/$60m) deal in January, and is already being mentioned in the same breath as his international team-mate after an impressive start to life in Manchester.

The midfielder says that he dreamed of playing for the Red Devils as a youngster, but his perception of the club took on a new meaning when he saw his compatriot leading their charge for major silverware in the late 2000s.

“For me, ever since I was a kid, it was a dream playing for Manchester United," Fernandes said during a Q&A on MUTV.

“I looked at Manchester with more interest when Cristiano was here because it’s normal when you have Portuguese players in some teams, you look at them more than other teams.

“But at that moment, I started to look at Manchester in a different way because you see Cristiano but then you see also the team and you have Paul Scholes, you have [Wayne] Rooney, you have [Ryan] Giggs and you have Roy Keane, [Eric] Cantona before.

“You have a lot of players… I don’t know… [Ruud] van Nistelrooy… I can stay here for hours saying all the names of players for Manchester United. Also, Nani, who’s played with me.”

The 25-year-old went on to insist that it was an "easy" decision for him to join United once they officially declared their interest, and he was delighted to make the step up to the Premier League after spending the previous three seasons in the Portuguese top flight.