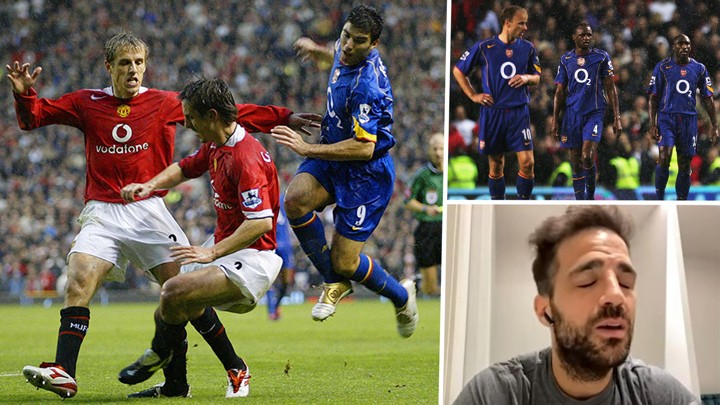 Cesc Fabregas has revealed his frustration at the manner in which Manchester United ended Arsenal's 49-game unbeaten run back in 2004.

The Red Devils beat the Gunners 2-0 at Old Trafford as Arsene Wenger's Invincibles side finally tasted defeat, with goals from Ruud van Nistelrooy and Wayne Rooney securing all three points for United.

The fixture will also be remembered for the 'Pizzagate' scandal that saw Spain midfielder Fabregas throw pizza at Sir Alex Ferguson after a fiery encounter between the title-chasing rivals.

And speaking to Rio Ferdinand's FIVE YouTube channel, Fabregas reflected on the loss and how frustrated he was to see the north Londoners lose their unbeaten record at Old Trafford.

"We were so disappointed. We were angry, we were upset. It had to come to an end, the 49 games, it can happen at Old Trafford against a great Man Utd side. But I think it’s the way it happened.

"First of all, Gary Neville, what he did to Antonio Reyes… mamma mia! But every single time he had the ball! Wayne [Rooney] dived for the penalty against Sol [Campbell].

"The emotion was that we had lost against a great team, which can happen, but we didn’t feel we should’ve lost. We didn’t feel it was the right time to lose our invincible run. Everyone was really, really upset."

Fabregas also acknowledged the challenge of coming up against Ferguson's United sides of that era, with the Red Devils winning an unprecedented 13 Premier League titles during the Scot's time in charge.

"What a team you were," the former Barcelona and Chelsea midfielder added. "We beat you a few times and it felt amazing but I always felt that in big games, where something really mattered, you were on top of us.

"Even the FA Cup final in 2005 (Arsenal beat United on penalties after a 0-0 draw at the Millennium Stadium) – you deserved to win that game."

Fabregas made 303 appearances in all competitions for the Gunners, scoring 57 goals.

The Spaniard won two trophies during his time with the north Londoners - the Community Shield in 2004 and FA Cup in 2005 - before deciding to make the move back to Barca, whom he left as a 15-year-old, in 2011.